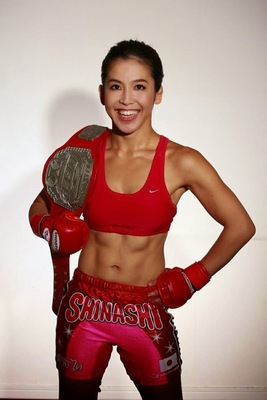 Shinashi is a Flyweight (99 pounds) fighter and has fought most of her career in the Deep and Smackgirl promotions. She specializes in Judo, Sambo, and Brazilian Jiu Jitsu, and she is one of the most successful fighters of all time, holding a record of 35 wins, two draws and only two losses, although some of her wins have come against questionable opposition, some of them without a single professional fight beforehand.

Many of her wins came by armbar. She has held several titles over her MMA career. She has been Smackgirl Lightweight champion. In 2006 she fought for the Deep Lightweight title but lost to Hisae Watanabe, who Shinashi beat earlier in her career. That was Shinashi's first loss in her career after going 21-0 with 2 draws. In 2008, Shinashi won Deep's Flyweight (99 pounds) title in a 1 night tournament at Deep 34: Impact. After giving birth in 2009, she stopped fighting for about 5 years. She returned to the MMA scene in 2014 and has fought five times since then, winning all her fights, with 3 submissions and 2 TKOs.