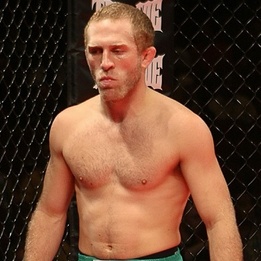 Riggleman and Sharipov took to the cage for the fourth bout of the evening in a bantamweight tilt. The bout served as an alternate bout for the bantamweight tournament.

Sharipov displayed some crisp boxing to start the fight until Riggleman dove for a takedown that Sharipov defended. Riggleman finally got Sharipov down against the cage with the back clinch and tried to get his hooks in. Sharipov stood and scrambled, lifted Riggleman off the canvas and slammed him back down before passing to side control. Riggleman rolled and got to his knees then his feet and dove in for another takedown of his own that Sharipov stuffed. Riggelman kept Sharipov clinched against the cage for some time until Sharipov used a fireman's carry to reverse the position. Sharipov went for a takedown, but Riggleman wound up in a superior position before both fighters got to their feet. Sharipov grabbed another double leg and took Riggleman down against the cage. Riggleman got back to his feet and the fighters exchanged strikes for the final seconds.

Sharipov landed a kick to the body to start the third. Rigglemand landed a good boxing combo, which Sharipov answered with a counter. Riggleman clinched Sharipov against the cage and the fighters traded knees to the legs and body. Riggleman landed some good punches to Sharipov's body and continued to work knees to the thighs. Riggleman swiveled to Sharipov's back and continued to attack his legs with knees. Riggleman picked Sharipov up and dumped him on his head, a move that looked like an unintentional illegal spike. Riggleman went to work with conservative ground and pound from inside Sharipov's guard. Riggleman picked up the pace a bit and landed some nice shots. Sharipov escaped to his feet and landed a right cross. The fighters exchanged punches in the center of the cage, both landing.