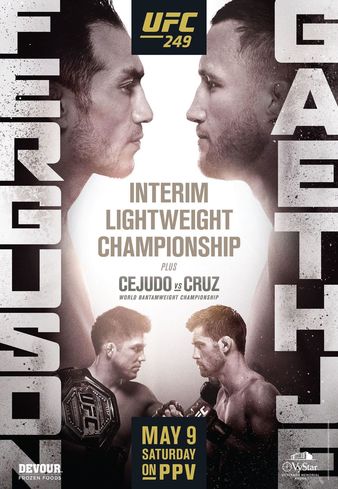 DC rogan and anik are having a bromance momment

"If anymore words come pouring out of your **** mouth I'm gonna have to eat every chicken in this room."

Well, that was an awesome card and a great way to bust the blueballs.

And good to see none of our regulars have succumbed to the beer flu!

Peace out gentleman. I'm drunk as **** and in dire need of a pizza and some sleep.

Yeah Fish. When a fighter starts blinking like that it can be a sign of swelling/bleed on the brain.
Let's hope that's not the case and Tony is on his way to Hospital now and he rests up.
Last thing we need is something terrible happening.

What a night of fights. My picks were ****e but Luque Price, Kattar Stephens, even Cerrone Pettis were superb fights. Francis killed a guy! Gaethje Ferguson was intense. All good, I may even have removed all images of Waterson Esparza from my mind.

Khabib vs Gaethje
Ferguson vs Poirier
Conor vs Masvidal

"we really out here"

Glad the UFC made it back. Great night of fights.

Tony-Khabib will most likely never happen

"Are these chicks going to hit each other or what?"

How did I do

Peterson was on a drunken rampage last night

Tony is my favorite fighter so I am bitter. Thought towards the end of the 2nd momentum was swinging his way but fantastic cornering by Wittman and implementation of that advice by Justin. Would've liked to have seen an adjustment from Ferguson to maybe try clinching more but with Justin's shorter arms and power I doubt it would've gone any better but maybe a few more elbow shots landing even it up a little.

A (very, very, very) little bit disappointed in Justin's lack of variety of fighting techniques but hard to criticize someone when it's clearly working and it's almost certainly the exact same strategy he should/will use against Khabib. Never forget Khabib couldn't take or keep Tibau down and none of his opponents including Tibau have Gaethje's combination of wrestling skill, quickness, athleticism, and mindset of using that wrestling to keep the fight standing so I'm excited for that because it has by far the most chance of any Khabib fight ever to not be dictated by the Dagestani.

Clearly Justin's newly found patience makes it seem like he's improved to the point that he would be favored massively in a Poirier rematch but that's not on the immediate horizon and it's a great checkmark for Dustin to have on his resume to get high profile fights.

Cejudon was right about us not having to listen/look at him anymore. I believe him because I don't think the risk of him coming back is worth any reward he could get. Imo the combination  the DJ rematch, probably got lucky vs. Dillashaw with it being his 1st drop to FLW and then him popping, winning a vacant title against a guy who was clearly the most favorable matchup for him among top contenders, not having to face any of those top contenders or Aldo, and then getting that gift of a stoppage vs. Cruz makes him clearly the least impressive champion relative to his on paper accomplishments of all time.

And finally, god damn HWs are sloppy. For as wild and undisciplined as N'Gannou's bullrush was, Jair's supposed high-level kickboxing was absolutely non-existent in his backpedaling lack of defense.

Man, I'm not keen on the whole Triple C, Cringe ****. But I wouldn't use that to justify calling Cejudo the worst champion of all time??? Relative to who? Tim Sylvia, Dave Menne, Ricco Rodriguez, Cody Garbrant???

Yup. The first round is close but Khabib gets a takedown and the second round Justin lands a combo but gets put down and the third he gets choked out
With Khabib around we will never have a new champion at lightweight. Ferguson is much more skilled off his back and styles make fights and he’s a better striker but nevermind.

I'm not sure how many people will agree with me, but after watching what just transpired I'm actually about 85% confident in Tony winning that fight, For the longest time I actually thought the reverse--thought Mcgregor would smoke Tony pretty handily. Anyway, here's why my mind is changed:

Conor Mcgregor and Gaethje are both counterpunchers, but they are very different. Conor will try and catch people coming in overextended,  especially off the back foot whereas Gaethje is more content to sit in the pocket and belt dip/ slip and set up short power counters. Gaethje is far better equipped to deal with a fighter like Tony who slings endless crazy **** at a high pace for this reason; he does his best work in limited space. He's much harder to pressure swarm as we just witnessed... Tony really couldn't get anything rolling without getting mollywhopped in the exchanges.

Conor isn't like that, he really does require his opponent to over-commit  and isn't good in tight at all. He's not really the kind of fighter who deals well with pressure especially if he's fighting a zombie, which is why someone like Diaz, who is a pressure fighter who is hard to put away gave him fits. Tony is basically just a far, far better version of Nate. He's got a better chin, better pace, better recovery, far better body work, far better jujitsu, far better cardio, better wrestling, better volume, has more grit, and is wild as ****.

Honestly, I just don't think Conor can beat him. It would look like Tony vs Pettis.

I don't think Mcgregor wants any part of him after the title bout we just saw.

But Goddamn I hope he gets that fight. He deserves a big one despite the loss. He's always turned up, and has never shirked a fight regardless of the risks to his career. It's a species of injustice if that work ethic and commitment goes unrewarded. He's still a top 3 guy, and the fight makes sense.

^ and people downvoted me for saying Francis has no technique. LOL!!

Haha @Fish
No worries, up/down votes in general blow bbc imo, pointless.. guess it gives the little people a power trip for a moment in time..

I usually agree with what ur talking about & a lot of times I’m just laughing aloud..

People love to give their 2 cents