The fighters are weighed in and we're set for a PPV that's been flying under the radar with the influx of UFC 214 announcements and the loom specter that is McGregor-Mayweather.

Still, UFC 213 is a solid card with two compelling title fights and a marquee Heavyweight clash. I'm looking forward to it.

Prelims kick off Saturday night on UFC Fight Pass at 630pm ET before switching over to FS1 at 8pm.

The PPV main card kicks off at 10pm. Enjoy! 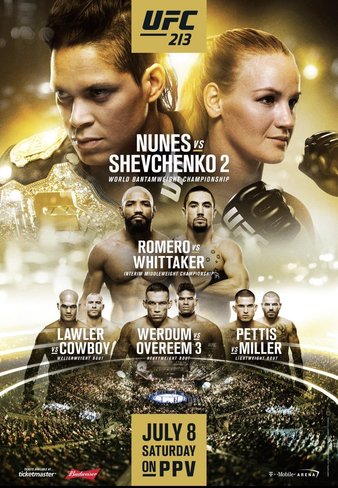 Couldn't buy a perfect, but not too bad.


"When the system fails you you create your own system."

My best guess would be the usual "I'm gonna cut 85lbs in 3 days so I can be bigger in the cage" going wrong (how can that happen, that never goes wrong, amirite?).

So she either got messed up by the drastic weight cut and didn't want to risk losing her belt in the cage or she regained too much and would miss re-weigh-in (something that type of weight cutting isn't tailored for and is pretty new, maybe she even forgot about it or didn't account for regaining as much as she did) and lose her belt outside the cage.

According to Dana (but who can believe that clown-shoes goof at this point), she was medically cleared to fight twice (the day before weigh ins and on fight day) and the second time she said she doesn't want to fight because she's feeling ill. If that's the case (I'm not calling it because "Dana said so" means nothing), I'm pretty sure she sneaked out of losing her belt on the commission's table.

Regardless, I think fighters need to really re-think starting being professionals and fighting in their appropriate weight classes. The game has changed and will keep doing so. Old school weight cuts and PED cycles just aren't sustainable or reliable enough anymore. If you want to be champ (and stay champ), you can't Hendricks your way through it.

Bisping is the GOAT.

Bisping always gets caught but rarely gets finished and the people that catch him end up using a lot of energy and unable to keep up with him for the rest of the fight. I find it weird that mousasi hasn't got a new contract yet when I think he would give all 3 of them fits stylistically

I hope Bisping does win this one.