The fighters are weighed in and we're set for a solid night of fights in Denver on Saturday night.

The action kicks off on UFC Fight Pass at 4pm ET before switching to FS1 at 5pm. The main card airs on big FOX at 8pm. 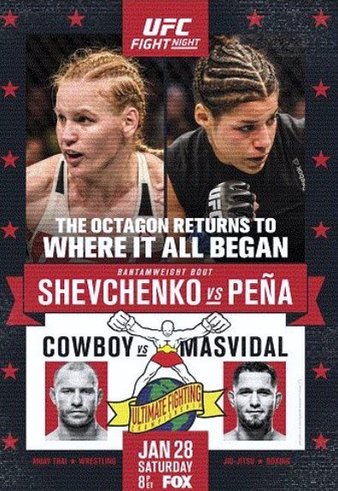 @TraeBlack You could honestly say the same thing about Jorge as well.

"I have not yet begun to defile myself. "

This is why they coulda put this fight as a prelim. I dont wanna see 5 rounds of this...

Masvidal/Cerrone was the real main event, let's be honest.

Thank you MMA gods for ending it

Complete with Cerrone underachieving to the max.

Nunes you got a challenge on your hands.

Valentina blew up the UFC's best laid plans ..... to make this end late

Valentina is the next champion, count on it.

The main and co-main both worked out the way I was hoping.
"vixen" lol

Great Wins by both Masvidal and Valentina War Peru

we got a welterweight contender boys. Also, this N,Gannou could be a big heavyweight star. It's been a while since we had a new face at the top of that division.

"You don't have to be perfect, just dont be fraudulant"

I like that Masvidal seems to be no longer "playing it safe" and holding a grudge about his split decision losses to Lorenz Larkin,Benson Henderson and Al Iaquinta (not to mention the unanimous decision loss to Rustam Khabilov that I thought he won two rounds) and looking like an animal tonight and his last fight against Jake Ellenberger where he consistently applied pressure and looked for the kill.Clearly a different fight now,or so it seems.

I think the switch has been flipped on Masvidal,he looks like a destroyer,but we'll see,oh and calling out Dana White saying he'll put 200K on himself over anyone Dana can put in front of him was entertaining as ****,a real throwback to his streetfighting negotiations i'm sure,good stuff,better than most of the crap I hear,plus I know Masvidal actually means it.

The fights tonight were overall pretty solid,not the strongest FOX card,possibly one of the weakest on paper,and it wasn't phenomenal but it certainly delivered imo.I am a bit biased though,I would have watched a fuzzy screen for 6 hours if it meant I got to see Pena get her ass kicked.Seriously though,I thought it was a good event overall.

@Kuma If you follow Masvidal on Twitter, you could just tell something was different about him just prior to the Ellenberger fight. Dude seems to have a newfound motivation and killer instinct, and it's been really fun to watch so far. As for that string of split decision losses, I thought he clearly won the Iaquinta fight. I didn't see the Bendo one, and thought Larkin edged him.