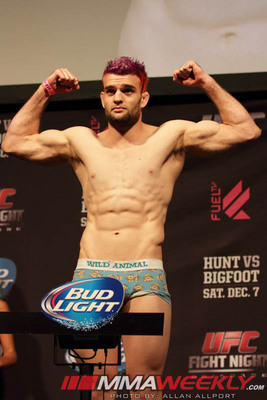 Ben Wall is an Australian lightweight fighter currently signed to the UFC. He was a former cast member of The Ultimate Fighter: The Smashes on team Australia. Of his seven career wins, two have been finishes with both being via submission.

Wall began his professional career in late 2010 and in his first sixteen months, he compiled a 6-0-1 record. He was selected to be a part of George Sotiropoulos' Team on TUF: The Smashes which featured a team from the UK against a team from Australia. He was picked to be in the first fight against eventual finalist, Colin Fletcher, but he would come up short in the decision. After the show was over, he debuted with the Australian promotion, Nitro MMA, and was able to secure the lightweight title.

In late 2013, Ben was in the United States training for his debut with Legacy FC when he was contacted by the UFC. He was chosen as a late replacement against Alex Garcia at UFC Fight Night 33 in Brisbane, Australia. He accepted the fight on twelve days notice despite being halfway around the world and the fight being at welterweight when his natural weight-class is lightweight. He would lose via TKO in just forty three seconds for the first loss of his professional career.