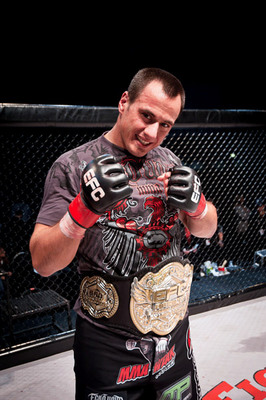 Ruan Potts is ineligible for regional rankings due to inactivity.
Fighters must have at least one completed MMA bout in the past two years to be ranked.

Potts is a former EFC Heavyweight Champion, making him the first fighter to be signed to the UFC from the EFC promotion. With an impressive 8-1 record prior to his fight at UFC Fight Night 40, with all 8 of his victories coming from either TKOs or Submissions (4 each), he dominated the EFC HW division.

Potts first fight in the UFC at UFC FN 40, was also the first time he was finished in a fight. Being defeated by Soa Palelei via TKO at 2:20 in the first round.

Potts' unfortunate career in the UFC continued when he met Derrick Lewis, at UFC 184: Rousey vs. Zingano. Coming in as a heavy underdog (+500), it came to no surprise when Lewis knocked out Potts at 3:18 in Round 2. Potts was then released from the UFC.

Potts' went back to his home country of South Africa to again fight in the EFC. In his first fight since being released from the UFC, Potts' is facing Cyril Asker. If Potts' wins this fight, he will most likely be given a title shot for the EFC HW belt. A title he won, but was never able to defend, due to signing with the UFC.