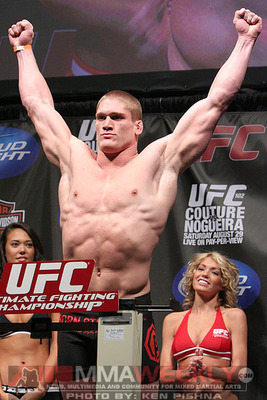 Todd Duffee is ineligible for regional rankings due to inactivity.
Fighters must have at least one completed MMA bout in the past two years to be ranked.

Todd Duffee, who trains with the famed American Top Team in Coconut Creek, Florida, began fighting professionally in 2007, winning five fights in a row—all of them by knockout or TKO—before joining the UFC heavyweight division in 2009. Upon his UFC debut at UFC 102, Duffee defeated Tim Hague by knockout at seven seconds of the first round, recording the fastest knockout to date in the UFC history books, although most fans believe that record should belong to lightweight Duane Ludwig.

A skilled striker with serious knockout power and an extraordinary physical specimen, Duffee is one of the most promising young heavyweights in the world in light of his youth, physical strength and fitness, and commitment to training. While fans have called him the next big thing at heavyweight, Duffee modestly says that he is “over-hyped.”

After having been pulled from several UFC fights due to injury after his promotional debut, it looked like Duffee's luck was changing when he took on the debuting Mike Russow. Prior to the fight, he stated that he felt the MMA world was over hyping him while underestimating his opponent. Throughout the fight, Duffee was using his crisp boxing to control and batter his opponent. In the third round, it looked like he was going to win a clear decision when Russow came out of no where to knock out Duffee in one of the biggest comebacks in UFC history. After the fight, injuries again plagued him. He was then inexplicably cut from the promotion due to what Dana White called "attitude problems".

After his departure from the UFC, he took a fight for Dream on two weeks notice against Alistair Overeem. He was quickly put down by a devastating knee. In Overeem's eventual fight with Brock Lesnar, he brought Duffee in as a training partner. He eventually bounced back when he signed with the Indian promotion, Super Fight League. In his promotional debut, he was able to finish fellow UFC vet, Neil Grove, with a right hook. He was then set to fight Jeff Monson at SFL's next event. The event ended up getting moved multiple times and eventually the company decided to restructure how it held events and Duffee was released from his contract.

Duffee made his long awaited UFC comeback when he took on Phil De Fries at UFC 155. He came back with a vengeance, knocking de Fries out in the first round and cementing his place in the UFC. This performance earned him the "Knockout of the Night" bonus and $65,000.

After the De Fries fight it emerged that Duffee had fought with a serious, undisclosed injury sustained during his training camp and would be ruled out for much of 2013. He returned to training after successfully rehabbing the injury in September. However, 3 weeks into his return to the gym, after waking up with severe pains and numbness in his arm Duffee was diagnosed with an unknown affliction which was later revealed to be Parsonage Turner Syndrome. Despite initially being told by doctors that he wouldn't be able to return for at least two years, Duffee returned to training after six months and in September 2014 announced that he was ready to fight.