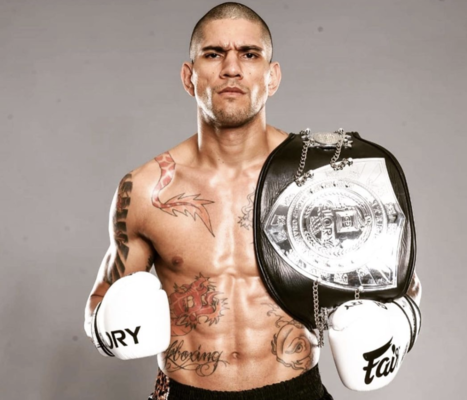 Fighting for a major organization has made Alex Pereira ineligible for regional rankings.

Alexsandro Pereira is a Brazilian mixed martial artist and kickboxer. He grew up in a favela in São Paulo, experiencing much hardship and poverty with his family. At the age of 12, Pereira dropped out of middle school and began working in a tire shop. Influenced by his co-workers, he began drinking alcohol and unfortunately became an alcoholic. In 2009 Pereira began Boxing and Kickboxing training as a way to get himself off the drink and get healthy.

He turned to Kickboxing solely, after giving up a career as a Boxer. Pereira came to prominence when he became a WAKO Pro Kickboxing Pan-American Champion in 2013. He also picked up a silver medal at the WAKO World Kickboxing Championships in that same year, losing out to Sergej Maslobejov in the finals. He has competed in promotions such as SUPERKOMBAT, It's Showtime, Jungle Fight, WGP Kickboxing and signed with Glory in 2014.

Pereira would go on to compete in Glory Kickboxing 15 times, going 11 - 4, earning notable victories over Sahak Parparyan, Dustin Jacoby, Simon Marcus twice, Yousri Belgaroui twice, Jason Wilnis, and Artem Vakhitov. He also earned 2 victories over UFC Middleweight Champion Israel Adesanya, when they fought in the Chinese promotion - Glory Of Heroes in 2016 and 2017. As of 2021 his Kickboxing record stands at 33 - 7, with 21 victories by way of stoppage.

Alex Pereira would have his first pro MMA fight on October 24 of 2015 where he would lose to Quemuel Ottoni by submission in the 3rd round. Despite still being an active Kickboxer, Pereira would win his next 3 MMA fights against Marcelo Cruz, Marcus Vinicius, and Thomas Powell all by Knockout. Pereira would get signed to compete in the UFC for his next fight. The UFC scheduled him to fight on the UFC 268 card on November 6th of 2021 where he would fight Andreas Michailidis (13-4 MMA, 1-1 UFC). Despite struggling in the first round from Michailidis's grappling, Pereira would go on to Knock Michailidis out 18 seconds into round 2, improving his MMA record to 4-1 (1-0 UFC). Alex Pereira is still an Active middleweight currently under contract with the UFC.