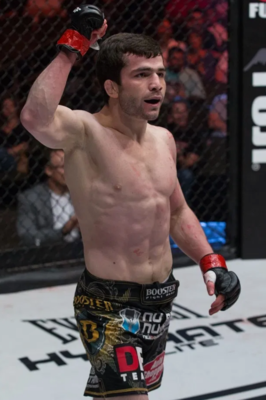 Fighting for a major organization has made Timur Valiev ineligible for regional rankings.

Timur Valiev was born in Makhachkala, Republic of Dagestan, Russia. The region is known to produce the best Olympic wrestlers and MMA fighters in the country. Not having much choice, you are born into a fighting culture and a competing culture. Timur represents a Dagestan Fighters fight club and Red Fury Fight Team.

From young age Timur got involved in many types of martial arts. From Freestyle Wrestling, Brazilian Jiu-Jitsu, Grappling, and Kickboxing, Timur was able to build a skill set needed to compete on the International level.

Timur Valiev is a three times Russian style Unifight Champion, Russian Pankration Champion, European Pankration Champion, Dagestan and New Jersey Grappling Champion and many more local tournaments participant. He now professionally competes in Mixed Martial Arts (MMA) and is steadily progressing through the ranks. He is on a 6-fight win streak with a record of 6-1, fighting in some of the top Russian MMA promotions in the country.

Timur has been recently signed to World Series of Fighting  (WSOF), the 3rd biggest promotion in the world that hosts some of the top fighters in the world.

Besides his regular coaching and training staff, Timur Valiev has been a sparring partner to UFC Champion Frankie Edgar, standout UFC fighter Edson Barboza, and many more UFC and Bellator veteran fighters. He has also been trained by one of the best striking coaches in the business Mark Henry. To add more to his experience, Timur exclusively trains with his best friend, brother, and one of the hottest prospects in UFC Rustam Khabilov.