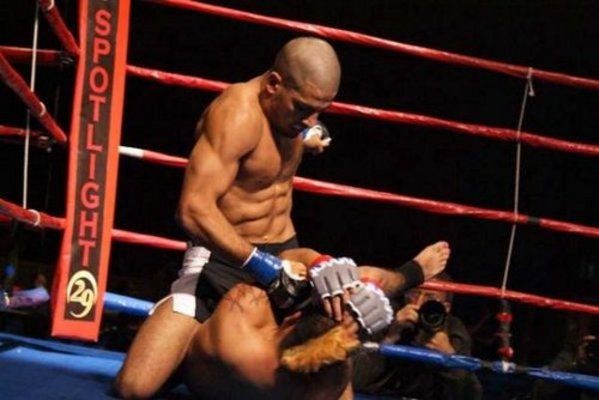 Fighting for a major organization has made Noad Lahat ineligible for regional rankings.

Born and raised in Samaria, Israel Noad Lahat (nicknamed "Neo"), who's both parents are military generals in the Israeli army, picked up Judo at the age 5 all the way up to age 18 with dreams of representing Israel in the Olympics.

At 18, as every Israeli does, Noad joined the army and served in paratroopers brigade until 2006. On his release from the army, 3 years later he went back to Judo but claims it just wasn't the same and something was missing for him. It was after his service he and a friend watched UFC 66 where he decided that MMA was the thing for him.

In October 2007 he packed his bags thinking he was going to the Israeli "traditional" post-army trip to South America, he landed in Copacabana, Brazil and was supposed to meet up with friends in Argentina, but landed in Ricardo Viera's BJJ academy and stayed there training BJJ at the highest level which led to him eventually winning the NOGI world championships in 2010 as a brown belt. Noad is currently a BJJ black belt now.

Noad fights out of American Kickboxing Academy who's doors he knocked on asking to train there. After a few sparring rounds with recent UFC lightweight contender, Josh "Punk" Thomson who was preparing for his 2009 Strikeforce title shot vs. Gilbert Melendez, though Noad was beat thoroughly they decided the kid's got potential and a lot of heart and invited him back the next day. To this day Noad still fights out of AKA where he also serves as BJJ coach.

Since then Lahat has put together a 7 fight win streak combining a variety of submission and TKO victories leading to the WSOF to sign him to a 4 fight contract circa December 2013 and scheduling him to fight in WSOF 8 on January 18th, 2014. This contract fell through on account of undisclosed technical difficulties.

In February 2014, Lahat signed a 4 fight deal with the UFC, which will make him the first Israeli to fight in the Octagon since Moti "The Hammer" Horenstein (1-6) lost to Mark Coleman at UFC 10 in 1996 and Mark Kerr at UFC 14 in 1997. Since then two more Israeli fighters have tried to get their UFC break reaching the elimination fights to get into the TUF house, Ido Pariente (TUF 8, lost to eventual champ, Efrain Escudero) and Lev Magen (TUF 16, KO'd in the first round by Canada's Michael Hill) but both failed to move forward onto the show.

In his first fight in the UFC vs. TUF Brazil 1 finalist Godofredo "Pepey" Castro at UFC Fight Night 38, Noad received a brutal "welcome to the UFC" with Pepey scoring an OTN bonus winning flying knee KO in the first round.

Leading up to his second UFC fight vs. Steven "Super" Siler at UFC on Fox 12 at San Jose on July 26th, 2014, Noad claimed to have the worse camp of his life on account of a crisis outbreak between his native Israel and the Hamas. Lahat managed to overcome and beat the heavily favoured Siler via a unanimous decision in the UFC Fight Pass card's opening fight. He then proceeded to deliver an inspiring post-fight interview when asked by Joe Rogan about him having to return to Israel shortly after the fight to join his unit in which he highlighted the importance of fighting for your country along with the ultimate desire for peace in the region.

He then flew back to Israel and joined his unit and has put his MMA career on hold indefinitely until the situation calms down and a sustainable cease fire is reached between the Hamas and Israel.