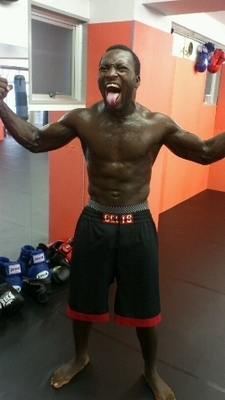 Lokoku fought at the '2017 Lethwei Grand Prix Japan' event and took on Teruhiko Kubo at 80kg in the third contest of the night. Kubo who comes from a Kyokushin Karate background - stayed on the outside from the go, picking at the stronger Lokoku with mainly low-kicks and jabs. Despite the early success, Lokoku would swing the momentum, going on the front foot and winging powerful haymakers at Kubo, and then initiating the clinch.
From there Lokoku overpowered and pummeled Kubo with high knees and power dirty boxing strikes, finishing the combo with a near flush headbutt, which is legal under Lethwei rules. After Kubo was dropped, he received the Lethwei rules obligatory 5 minute break. When the fight resumed - Lokoku pressed foreward again winging power head strikes and put down once more the visibly beaten and diminished Kubo, resulting in a tko stoppage victory.