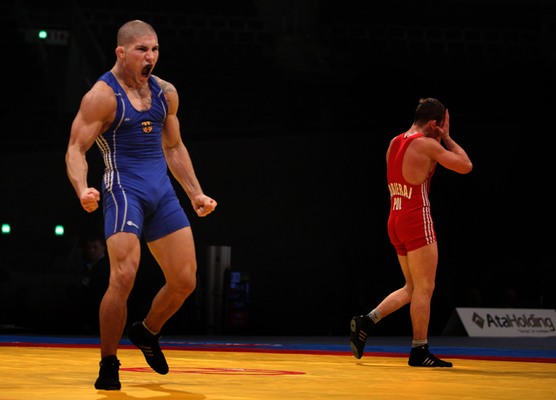 Saba Bolaghi is a German mixed martial artist born April 22nd 1989 in Frankfurt. The son of an Iranian immigrant who acted as his first wrestling coach Bolaghi went on to lift numerous titles in freestyle wrestling. Wrestling first for the KSV Neu-Isenburg club and then ASV Griesheim before finishing his club career with RWG Mombris-Konigshofen in the German Ringer-Bundesliga - the top level of club wrestling in Germany.

Prior to transferring his full focus to professional MMA in Spring 2014 Bolaghi had found success at national and international levels. Domestically he captured 2 Junior and 1 Senior Bundesliga Championship titles as well as the 2011 Bundesliga Wrestler of the Year accolade and internationally took the bronze medal in the 66kg category at both the 2009 World Junior Championships and the 2011 European Senior Championships in Ankara, Turkey and Dortmund, Germany respectively.

In 2013 Bolaghi announced his intention to pursue MMA professionally, joining Team MMA Spirit as a wrestling coach and honing his skills alongside a who's who of German based fighters including; Bellator Tournament winner Daniel Weichel, M-1 Light Heavyweight Champion Stephan Puetz and former Cage Warriors Lightweight and current M-1 Featherweight Champion Ivan Buchinger.

Bolaghi made his much anticipated MMA debut on April 26th 2014 at Mix Fight Gala 15, submitting Austro-Chechen Tiger Muay Thai representative Islam Siszbulatow in the very first round. Since then Bolaghi has pieced together a 4-0-1 professional record and established himself as one of Western Europe's brightest prospects. A potential major test against French BAMMA veteran Teddy Violet failed to materialise after the 6/6/15 Cage Run event in Herne, Germany was cancelled. Despite the set back, his wrestling pedigree, team base and undefeated record make Saba Bolaghi certainly one to watch.