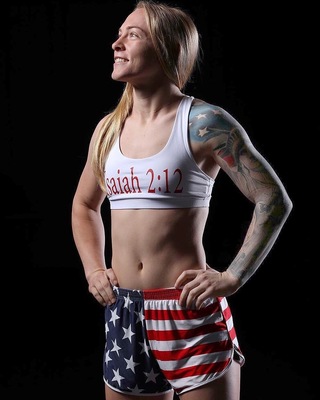 Fighting for a major organization has made Kay Hansen ineligible for regional rankings.

Kay Hanson is an up and coming American mma fighter with a ju-jitsu, wrestling and boxing style.

A purple belt in 10th planet ju-jitsu. Hanson started training in combat submission wrestling and faught in pankration youth fights Where she achieved a record of 4-0 with 3 submissions.

Making her amateur mma debut at just 18 years old she faced Cecilia Padilla.  She won the fight by TKO in round one.

Making her pro debut at invicta fc 26 Hanson faced off against emilee gettys she finished the fight by 1st round armbar.

Hanson was the youngest fighter to win in invicta fc history.

She next faced Kal Schwartz at invicta fc 28. During the fight Schwartz landed a brutal elbow that cut kay open bad.
She lost the fight by TKO.

She next faced Erin Blanchfield at invicta fc 32 where she lost a majority decision.

Her next fight was at invicta fc 33 against Sharon Jacobson although it seemed like she was losing the fight early on late In the third round  Jacobson went for a double arm belly to belly suplex which failed and saw Hanson land on top of her. While Jacobson tried to scramble out from the bottom Hanson locked in a belly down armbar to win the fight late in the third round.

Her next fight is on January 31st 2019. it will be a boxing match vs jessica Juarez.