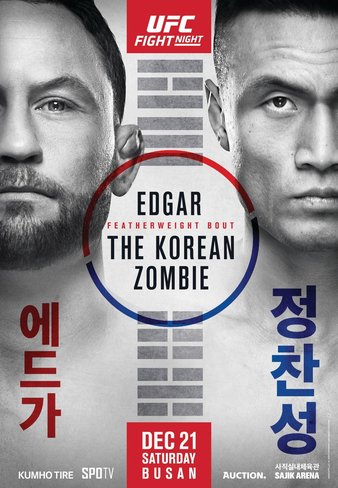 Jung vs. Rodriguez
Da Un Jung, DEC
This one shall be fun

Kim vs. Mazo
Ji Yeon Kim, TKO, R3
Man this is a fun fight on paper

Kim vs. Mazo Changed from Confirmed to Cancelled

Wow, if there ever was a sleeper card

If I time it right, this will be the card I obtain a black belt in combat observation. Many long days on the couch yelling at a screen will finally be validated as a worthy effort. I'd like to thank beer and chips for always being in my corner. Good luck in Korea everybody. Should be a fun card.

This card is fantastic.. might be a bad night for Koreans.

Macedo vs. Lemos Changed from Confirmed to Cancelled

Ortega got this I think . Possibly even by a submission, even just to prove he is right back in it after his recovery from the Holloway Beatdown,  which was incredible btw . Watched that fight so many times

This is a really deep, quality card. Barcelos vs Nurmagomedov has me the most interested......******* great fight!

"If you need Viagra, you're probably with the wrong Girl--Donald J Trump"


Is Oretga going to outsrike KZ? No. No he isn't. Is Oretga hittable? Yes. Very. He's been wobbled by big punchers before, but I don't think he's ever been hit by someone with the power. timing or counters KZ has. We're talking about the guy who literally murdered Renato with one. Max put one of the worst shellackings I've seen on Ortega. That has to have taken a toll. Brian will have to try and win this by sub...but KZ has never been subbed, and I can't even remember seeing him in a position where it looked he was going to be. I think The Zombie hits another brutal finish here relatively early.


Tough, tough bout to call.I thought Ooze was robbed Horribly against Reyes....that decision was horse ****. Now, I will preface this by saying anyone who says they are confident in the outcome of this fight is either deluded or full of ****, because both guys have clear paths to victory.. Oezdemir can end anyone. Fast. And Rakic's tendency to hang around in the poket too long, or exit out-of-time because he wants to throw a backfist or spinning elbow is something that is going to produce big yields or horrible self-inflicted destruction this fight. That stated, I am supremely confident that if Rakic somehow gets to mount on Oezdemir he will pound him out. I also give Rakic the best chance of winning a dec. He is more high output, and has the better gas tank. Bit of a coin toss.

This is a bad fight for baby Nurmy. Barcelos has everything required to really **** up Said's night. Big power, explosiveness, dangerous subs, very good counter reads. It will be tough for Nurmagomedov to beat him in a three rounder. I've taken Barcelos by sub but a KO/TKO is equally possible. Said isn't a finisher. It will be extremely hard to control the beast that is Barcelos en route to a decision win. Every single entry will put him in danger, and if he doesn't hit a TD right and end up getting his back taken it is probably good night Irene.


I'm far from impressed with Roriguez. Yeah he got that flying knee finish on the contender series, but he won't be pulling that **** on Jung, who is really just a better fighter from where I stand. Roriguez is a pretty standard muay thai fighter, really. Jung has a more interesting Karate base and remind me of Machida in some ways. He's got very good good straights,  seems to carry power in both hands, and is effective when pressuring.. Rodriguez is more of a dance-around-and-wait-for-an-opening kind of guy that slips in the occasional oblique/calf kick. I think he gets beaten up and finished here.

I'm a Pantoja fan. Doesn't have any quit in him. What concerns me about this fight is Schnell's grappling game, which I believe is underrated. I don't like how Figueredo was able to control Pantoja from the top. as easily as he did. It's possible that Schnell can hit TD's early in each round and hump Pantoja like a randy turtle for the majority, ultimately winning  a majorly soft-on inducing decision. That said, if he can't do that, Pantoja will beat the piss out of him. Much better striker. I'm going with hypothetical future B.

Mokhtarian sucks. It's just that simple.He shouldn't be in UFC. He should be selling Kebabs out of a cart in western suburbs Sydney. Choiisn't amazing either, but he can take a punch, never stops coming forward and has a good right overhand hook thing. He's pretty OK on the ground, too, and does well from top position. I'll take him here.

i like Ma. He turns up to fight...but Morales is an animal. Nasty, nasty power coming in bunches, and if he gets his opponent hurt he can choke them out too, even standing. Ma is hittable, especially early, and he's quick to get baited into a firefight. I can see him getting absolutely ******* blitzkrieged within one

"If you need Viagra, you're probably with the wrong Girl--Donald J Trump"

Yeah I feel that Fish. Thinking maybe Schnell can get the W. Should be a good fight. I'm hot for this card.

Ortega vs. Jung Changed from Confirmed to Cancelled

Ortega is out... damnit!
Who do you guys think fills in? I think everyone would love to see Rodriguez vs KZ 2

No more Ortega? Well this sucks!
Stephens or Yair would be cool, but I’d like to see Zombie vs Zabit. Highly doubt that will happen though.
.

KZ vs Frankie? Not sure how I feel about that...

I do know, I hate it. There are so many other guys than Frankie and I want to see him at BW

Now we got Frankie Edgar as a rumor... isn’t he scheduled to fight Sanhagen in January?

He says he thinks he can hit both KZ and Sandhagen