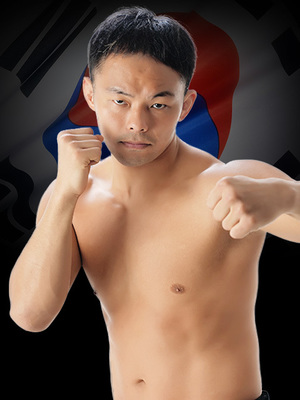 Hae Jun Yang is ineligible for regional rankings due to inactivity.
Fighters must have at least one completed MMA bout in the past two years to be ranked.

“Hungry” Yang is one of Korean MMA’s fastest rising young stars, having started training while just a 15-year old high school freshman. In his senior year of high school, he began wrestling in order to round out his MMA skill set, and after only a few months of training, he took second place in the ultra-competitive Korean High School National Wrestling Championship. Since then, he has also won the Korean National Grappling Championship and wrestled for Yong-In University, home to numerous Korean Olympic medalists. However, it is his striking skills for which he is best known and most feared. Since making his professional MMA debut at the age of 19, his devastating power has earned him multiple wins by knockout inside the first round. His heavy hands are matched by a granite chin, and with his 2010 release from the Korean military enabling him to now fight overseas, fans should expect big things internationally from the always exciting Yang.

"Hungry" Yang left NOVA MMA and was presumed to be retired after injuring himself while training in Japan. However, after two years of no action, he signed with T.A.P Boxing&Wrestling (Team T.A.P) and T.A.P Management for Athletes on November 28, 2015, and won the Korea-based All FC 01 middleweight tournament becoming the first promotion's first champion.