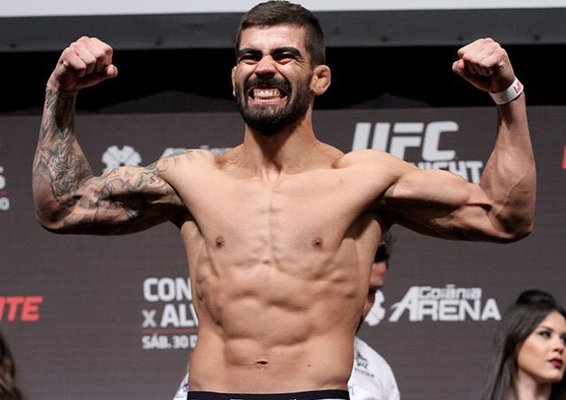 Fighting for a major organization has made Elizeu Zaleski ineligible for regional rankings.

The Brazilian fighter Elizeu Zaleski is a current UFC Welterweight with a 7 wins / 2 losses fight record. He is currently coming off a loss to Jingliang Li at UFC on ESPN+15 via T.K.O in the third round. Zaleski was riding an impressive 7 fight winning streak in the UFC Welterweight division prior to that loss. The loss to Li was his first stoppage loss in the UFC as he only had lost his first UFC fight via decision against Niclas Dalby at UFC Fight Night 67.

His highlight reel in the UFC is impressive nonetheless with the more notable of them performances being the fights against Sean Strickland, Lyman Good and Luigi Vendramini.

On UFC on FOX 25 Zaleski went through a hard 3 round war against Lyman Good winning it by split decision. In this fight Zaleski showed his great potential and displayed his wide skill set through all 3 rounds as he had a perfect "dance partner" in Lyman Good at that night.

At UFC 224 Zaleski dropped Strickland with a beautiful spinning hook kick and finished him on the ground with punches in the first round.

At UFC Fight Night 137 he went to finish young Brazilian prospect Luigi Vendramini dropping him via flying knee and finishing him with punches in the second round.

Elizeu Zaleski is known to MMA fans for his flashy style and respected by his fellow fighters as a clinical striker. Zaleski also talked in multiple occasions about his love to capoeira and wanting to mix his capoeira background into his fighting style.

His demeanor towards his opponents is very respectful and calm as he considers his fighting to do the talking for him.

Zaleski doesn't speak english and therefore is a bit more difficult to market in the US but his fighting style got him to earn a lot of "fight of the night" and "performance of the night" bonuses.

Elizeu Zaleski is definitely one of the more fun to watch and exciting UFC fighters at the moment.