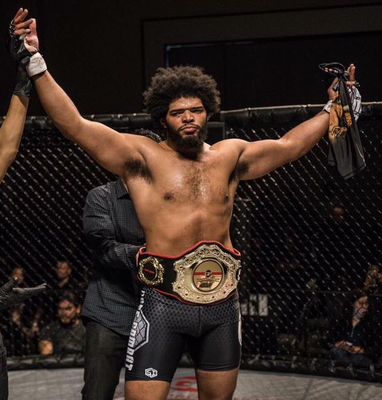 Adams was born and raised in Houston, Texas, the son of Alicia Arciniega and Bret Adams, along with his younger brother Gator Adams. He attended Strake Jesuit College Preparatory High School and graduated in 2010. Adams wrestled while at Strake and once took 5th place at the Texas State Championships and was named an All American at the AAU National High School Wrestling Competition (Disney Duals).  While at Strake Adams also played football and competed in shot put and discus.

He went to college at the Virginia Military Institute where he wrestled for 5 years between 2010 and 2015, serving two years as team captain and wrestling in over 100 collegiate matches. He received a BS in Computer Science with a minor in Exercise Science, twice making the Dean’s List.  During this period he began training at the Paradigm Training Center in Houston to supplement his wrestling coaching. He continues to train at Paradigm to this day.

After graduating, Adams pursued an NFL tryout for 6 months, with both the Green Bay Packers and the Denver Colts showing interest.  Instead of waiting a year to see if he would earn a tryout, Adams decided to pursue a career in martial arts. After a tryout with the WWE, Adams decided to focus on mixed martial arts. Adams then joined Garcia Promotions as an amateur in September of 2016.

Adams went 3-0 as an amateur and was recruited to turn professional by the Legacy Fighting Alliance in September of 2016.  While with the LFA, Adams once again went 3-0 and was given an invitation to appear on the July 31st, 2018 episode of Dana White’s Contender Series. Adams scored a decisive TKO by way of ground and pound against Shawn Teed at 4:17 of the first round, earning himself a UFC contract. On December 15th, 2018,  Adams made his UFC debut with a TKO victory over Chris De La Rocha at 0:47 of the third round during UFC on Fox 31.