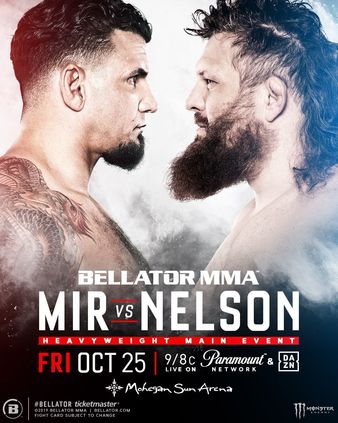 Mir vs. Nelson II
Roy Nelson, DEC
Why!!!? Why does Bellator love these "legend league" fights Soooooo goddamn much? Honestly. there needs to be an option to pick a ************* draw. Because I see Noooo reeaaal way, a judge can score a round of ****, 3x over.... Draw. all 3 rounds. It's honestly, another one of them fights, where they force you to choose between **** and ****. Like an assassin that comes to kill your ass, but he's nice enough to offer you the choice of how you die. I'm sorry. but that's how I feel about these fights...

Mir needs to retire. Nelson is so damn slow these days he might not do much damage though.

As far as they go, this fight isn't much better than the last Tito vs Chuck. The flabby, shellshocked piebeast that was pressed against the cage effortlessly and hammered out like last month's beef for today's schnitzel  by Ayala (who let's be real, is a fairly ****** HW in his own right) has no business stepping inside the cage again.

Pig country is definitely on the tail-end of his career but he's not even close to being as shot as Mir who at this stage is probably only just barely capable of bouncing rub-a-dubs at the local tavern. I don't think there's enough Kangaroo meat in the ******* universe to foil father time here. He would probably be KO'ed by one at this point, too, at an exhibition match at the county fair and in 16's.

Nelson will find a home for one of those donkey-kick overhands and Mir will crumple to the floor jerking like a chinese robot dog with a bucket of pickle brine poured over it.

And I don't want to see it. The question of this fight isn't what; it's why. Why does this need to happen? There are roughly as many people in the world who want to see this fight as there are  who want to see a cow stand around in a bare room with a ***** glued to it.

Want a visual analogy of this fight? I submit this picture  of a gift given me by a friend about a year ago or so now. It's a terracotta bowl featuring the withered remains of what I believe was a once lush species of fern, killed by own neglect, now  looked-over sorrowfully by Buddha for all eternity.

Sad. So, so many levels of sadness.

↑↑↑ Some more outstanding journalism by my favorite journalist. ImperatorFishrat. ↑↑↑

Why all the Jake Hagers opponents come from KS/Missouri region?

"We're going to turn this team around 360 degrees." - Jason Kidd

Is there such a shortage of fighters that u would put Mir vs Nelson as a main event?

Edit : literally nobody cares about this fight

Rosta vs. Hefny Changed from Confirmed to Cancelled

Mir vs. Nelson II
Frank Mir, DEC
I think Mir will win with his superior grappling skills, just like he did in their first fight.

Hager vs. Garrett
Jake Hager, SUB, R1
This should be another easy win for Hager.

Medina vs. Santiago Changed from Confirmed to Cancelled

Mir vs. Nelson II
Roy Nelson, TKO, R1
Frank Mir is 3 years younger than Big Country??? That doesn't seem right. Mir has been around forever! Hopefully this main event nobody wants to see is over quickly!

Ruth vs. Jackson
Jason Jackson, TKO, R3
Am I the only guy giving Jackson a real shot at winning here?

The middleweight fighting at light heavy?

Mir vs. Nelson II
Roy Nelson, DEC
I love Frank Mir really. Dammit! I love Roy Nelson too. But winner this fight will be Nelson. It seems so to me

Tapology alert for all u pervs out there

Rebecca bryggman is a ****star... Orion Starr. Other chick might be ****** cause bryggman gets beat up by ****s pretty good. She even brags in one scene about how she never gets hit in mma fights as much as she gets hit in ****. She did facial abuse. That's extreme rough ****. Enjoy beta nerds let's get that money...