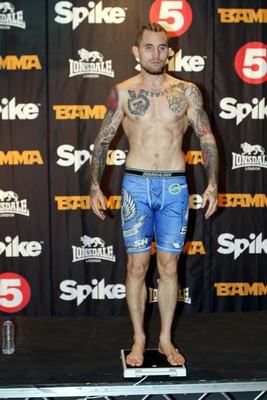 Martin Stapleton is ineligible for regional rankings due to inactivity.
Fighters must have at least one completed MMA bout in the past two years to be ranked.

Martin Stapleton is an English MMA fighter. He began his MMA career in 2007, winning his first 4. He lost his next fight to submission ace Paul Sass. He won his next fight bringing his record to 5-1.

Stapleton would then get a shot on The Ultimate Fighter USA vs UK, winning his "audition" match, defeating Dan James to get in the house. He was eliminated in the quarterfinals by Cameron Dollar via RNC. Back to England,  Stapleton would win his next 2 fights before taking a 3 year absence from the fight game due to military obligations.

Since returning to MMA, Stapleton has won all 5 of his fights, all of which took place over the course of just 6 months.

*Commando in the Royal Marines*