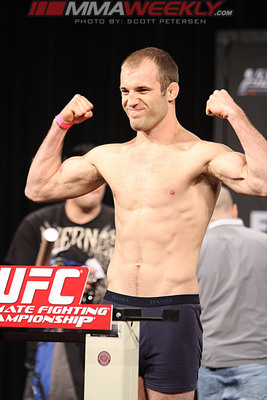 Collin Hart is ineligible for regional rankings due to inactivity.
Fighters must have at least one completed MMA bout in the past two years to be ranked.

Collin Hart was a member of Team Jones on the 17th season of The Ultimate Fighter. Hart won via 1st round submission (RNC) over Mike Jasper to gain entry into the TUF house. Jon Jones selected Collin with his 5th round pick and 10th overall.

In the 3rd episode Hart was selected by Chael Sonnen to fight Team Sonnen's 6th round pick Kevin Casey. .

In the fight with Kevin Casey, Hart was able to control the fight on the ground from the top never giving Casey an opportunity to work his ground game. Hart won a 20-18 decision. He would lose in the quarter-finals to eventual winner Kevin Gastellum. He would still get a shot on The Ultimate Fighter 17 Finale against Luke Barnatt. He lost a Unanimous Decision and it was later announced that he had been cut from the promotion.