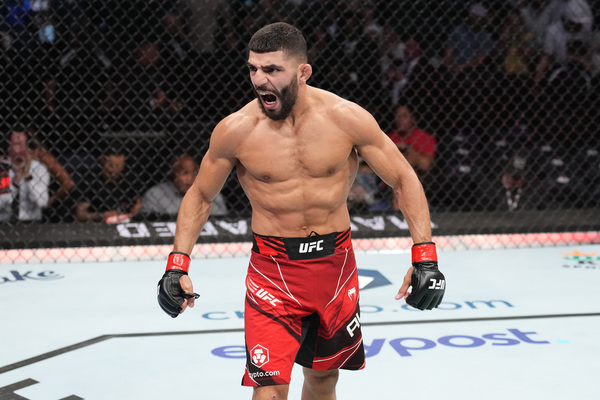 Fighting for a major organization has made Amir Albazi ineligible for regional rankings.

Amir Albazi is a Swedish-Iraqi fighter born in Bagdad Iraq on the 27th of October 1993. Albazi is currently fighting out of team London Shootfighters, a team with names such as Michael Page and Karlos Vemola.
The Prince would go professional in 2009, defeating Andre Batista in the World Ultimate Full Contact promotion. Albazi would fight 3 times in this promotion going 3-0, the other 2 opponents Albazi beat were Pavel Kulish and Bagandov Murada.
From 2010 to 2016 Albazi would fight in various promotions building his record to a perfect 8-0 before making his debut in Bellator where he would fight Jamie Powell on Bellator 179 and win by unanimous decision. His second and (so far) last Bellator fight would be against Iuri Bejenari, a bout that Albazi would win by rear naked choke in round one of the contest.
Following Albazi's short stint in Bellator Albazi would appear in Brave CF twice during 2019. In Brave CF Albazi would lose his debut against Jose Torres by decision and win his second fight against Ryan Curtis by key lock in round 1. The second fight of Albazi in Brave CF would also be his last in the promotion.
In 2020 Albazi got his UFC debut, entering the UFC with a impressive 12-1 record Albazi would be victorious against against Malcolm Gordon in a bout that would last 4 minutes and 42 seconds before Albazi submitted Gordon by triangle choke. In 2021 Albazi would fight for the second time in the UFC on the early prelims of UFC 257: Poirier vs. McGregor 2, Albazi would defeat his opponent Zhumagulov by unanimous decision, extending his win streak to 3, remaining undefeated in the UFC and further improving his record to an impressive 14-1 (2-0 in UFC).

Will Santiago is 40 today!