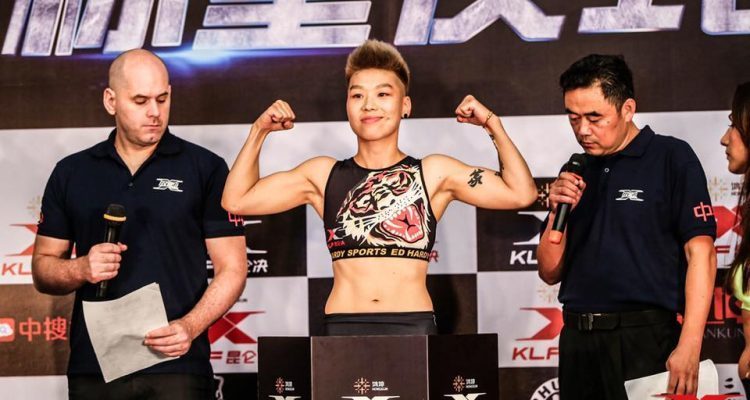 Fighting for a major organization has made Jingnan Xiong ineligible for regional rankings.

China's Jingnan "The Panda" Xiong is a female flyweight currently competing under ONE Championships banner as their Strawweight Champion.  She would start her MMA career in 2014 under the Kunlun Fight banner. She would win her first five MMA fights, all via finish.

She would then be matched up with Colleen Schneider at Kunlun Fight 26. Colleen was a former SFL flyweight champion and had more than double the amount of fights as Xiong. The Panda would fall short in a unanimous decision loss to Colleen ending her undefeated run and handing her, her first defeat.

She would not let this keep her down however as she would return to the ring less than 3 months later, winning her next 4 fights with the promotion before leaving Kunlun Fight to join ONE Championship in 2017.

Her first fight with the promotion would come against April Osenio at ONE Championship: Warriors of the World. The two traded strikes early before Xiong landed a good shot that prompted April to shoot, she wasn't able to secure the takedown but managed to press Jingnan against the fence where she would hold her for a little while before she managed to reverse the April and disengage from the clinch.The two would trade strikes before they ended up in the clinch again. Eventually they ended up on the ground with April in mount but Xiong had a tight guillotine locked up. Osenio survived the guillotine and Xiong made it back to her feet where she would TKO April with a little over one minute left on the clock in the first round to secure her first win with the promotion.

Xiong would make her return to the ONE cage, a little over a month later, this time fighting Tiffany Teo, headlining ONE Championship: Kings of Courage for the Vacant Strawweight belt. Xiong would finish Tiffany by strikes halfway through the fourth round to become the inaugural ONE FC strawweight champion.

Jingan would defend her belt in her next two fights against Laura Balin and Samara Santos before being matched up with the Atomweight champion Angela Lee as Lee moved up to try and become a two weight world champion. Xiong would close as the underdog in her bout against Lee who despite being the champion a weightclass down outsized Jingan. Both girls went to war and after a hard fought 4 rounds, Xiong managed to put an end to Lee's double champ aspirations as she stopped the Atomweight champion via TKO in the fifth to retain her Strawweight belt.

Following her win against Lee, The Panda decided that a move down to challenge Lee for her Atomweight belt was in order, this time Xiong closed as the betting favorite. Xiong would open heavy to establish her striking dominance but eventually Lee came back from the early adversity to submit Xiong at the end of the fifth round.

Xiong having lost her last fight came back to strawweight to defend her title against Tiffany Teo In a rematch. This time Xiong would take Tiffany to a unanimous decision which she won comfortably.

Xiong was supposed to return as the main event of ONE Empower to defend her title against Michelle Nicolini but the event got postponed, it remains to be seen If Xiong will remain on the card but as of July 27th 2021 we don't yet have any word on when Empower will be rebooked or when Xiong is expected to return