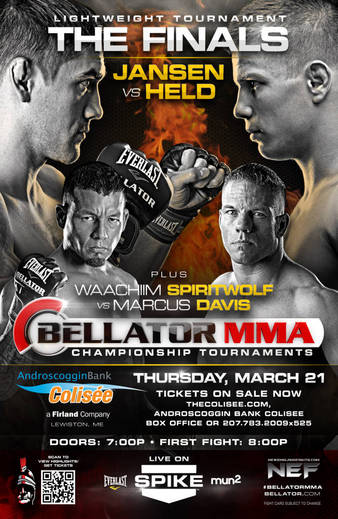 For those of us who didn't watch, is there any fights I should go out of my way to watch that's up there and should be ranked as one of the best fights of the year?

Just watch them all, every fight ended in the first besides the main event and a TKO in the 3rd.

I think I spent more time fast forwarding through the commercials on the dvr then I did watching the fights.

I'd like to see Michael Page step up out of can-land now ... I love his style, but the whole hands-down thing is only good until you reach a certain level of striker ... I want to see if he's buying into the whole "British Anderson Silva" thing too much or he smarts up once he stops getting fed cans ...

I understand the need to give him an easy fight to build his name in the US, but it's about time he fights someone so we can see if the hype is real ...

Man, you don't realise how damaging taking a punt on an underdog can be. Like a lot of people I'm not totally convinced Page isn't going to have the hype train derailed. So instead of going for the 1st Rnd KO pick for page I picked against him - what the hell I thought.
If I went with the safer pick I would have tied for 23rd instead of tied for 151st. But hey, no guts no glory I suppose :P

Page may get derailed as soon as he steps up. We actually have to see him against decent competition. Feeding him some guy coming off back to back losses who turtles up as soon as he gets hit isn't the way to show page is the next big thing. That fight didn't make me go wow page is good, it made me wonder how Bellator isn't embarassed to have signed Ryan Sanders. If they want to be viewed as a top promoter they can't just bring cans in to get destroyed.

@Big, I don't think they wanted to show he's the next best thing with that matchup, I think they just wanted to get his name out there with the American non-hardcore fans first ... you know, take no risks with a potential superstar with his first fighter overseas and with a bigger organization.

Now they're going to have to give him someone solid if they want him to be taken seriously ...

My guess is as soon as he meets a good striker or a wrestler the bubble pops ... I hope not, but the whole ****y hands-down thing never lasts and he doesn't look like a guy who's humble enough to get it before he's shown it the hard way.

How has no one on the internet made a gif of Vitkay's celebration dance yet?  That guy had some groovy moves.