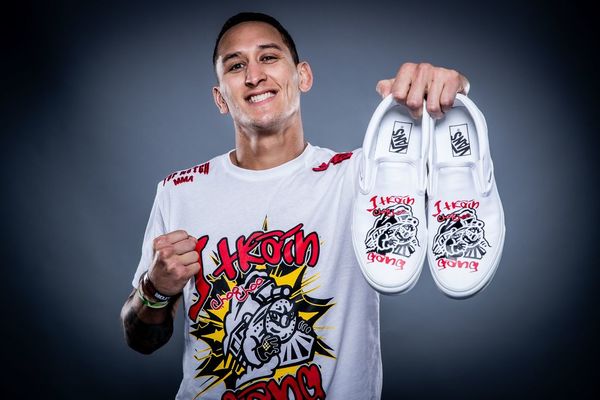 Fighting for a major organization has made Justin Gonzales ineligible for regional rankings.

Justin "J-Train" Gonzales is an American Mixed Martial Artist currently competing in Bellator MMA's Featherweight division. He was born in Denver, Colorado, USA and has been in Colorado his whole life. He started training in the sport of wrestling at the age of 8 after his father declined him wanting to learn how to box and offered wrestling as an alternative. He excelled in wrestling being a two-time Colorado State Champion for Northridge High School in Greeley, while also achieving All- American Honors in Greco-Roman Wrestling. He is an inductee into the Colorado Youth Wrestling Hall of Fame.

He attended the University of Northern Colorado on a wrestling scholarship where he was teammates with former UFC Interim Champion Justin "The Highlight" Gaethje. He was on the UNCO line-up for 3 seasons before finishing his last year of eligibility at Division Two team Colorado State University-Pueblo. He graduated with a Bachelors Degree in Exercise Science with an emphasis in Education.
While attending college in 2012 Gonzales had his first mma fight winning via Technical Knockout in the 2nd round. He would fight two more times while still being on scholarship for wrestling. Unsure if fighting would be his calling he fought a total of nine amateur fights winning all via KO/TKO before making his pro debut in the summer of 2016.

After winning his first four pro fights, Gonzales won the Sparta Combat League Featherweight title defeating Nick Rhoads via Unanimous Decision and defended the title four times (finishing three of his opponents in the process). After his fourth defense Gonzales took part in the second episode of the third season of Dana White's Contender Series. He won his fight via Unanimous Decision over Zach Zane. Gonzales outstruck Zane 123 punches to 13 for Zane, and had over 13 minutes of control time. Despite the dominant win Gonzales was not granted a contract by the UFC President.

After the appearance on DWCS Gonzales was on Legacy Fighting Alliance's first "covid" card winning their vacant Featherweight World Championship with a round four TKO win over Jake Childers. This win would get the attention of Bellator MMA and Gonzales would sign a multi-fight deal with the promotion having his first fight at Bellator 260 winning via Split Decision to at the time ranked #9 Ty-Wan Claxton. Gonzales got a bump up in competition facing #4 Aaron Pico at Bellator 271 who Gonzales suffered his first professional loss to. Gonzales received high praise for his performance being Pico's first opponent that he has not finished in the distance. After which Gonzales bounced back with a win over UFC Veteran Kai Kamaka III at Bellator 279 via Split Decision.

Gonzales trains at Top Notch Sports Academy in Greeley, Colorado and Trials MMA in Fort Collins, Colorado. Gonzales' coaches are WEC and King of the Cage veteran Mike Alirez, and former IFL Lightweight Champion Ryan Schultz.
Gonzales has two brothers, one of which also competed in MMA.
Championships and accomplishments: