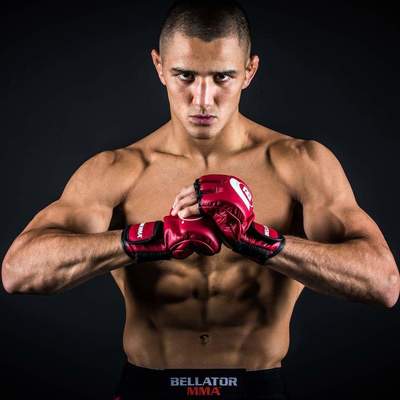 Fighting for a major organization has made Aaron Pico ineligible for regional rankings.

Aaron Pico (born September 23, 1996) is an American mixed martial artist and former freestyle wrestler, currently signed to Bellator MMA where he competes in their Featherweight division.
Aaron Pico is a 7th generation Californio. Pico is a direct descendant of Pío de Jesus Pico, who was the last Mexican Governor of California under the Providence of Mexico.

He Has a History in Wrestling and Boxing at a young age, Pico qualified for the Olympic trials in 2016 at 19 years of age. No teenager had made the freestyle wrestling Olympic team for 40 years.
In addition to wrestling, Pico also competed in boxing and Pankration. Pico won the national PAL championship in 2008 and was national Junior Golden Gloves champion in 2009, he won ‘most outstanding boxer’ at both tournaments. In Pankration, Pico also was a national champion in 2008. In addition, Pico went to Ukraine in 2010, and won the golden cup European Pankration championship. During this time Pico also won the California state championships in both sports.


In early November 2014, Aaron signed a long term unprecedented contract with MMA promoter Bellator MMA and its parent company Viacom, as their new blue chip prospect.Pico is versed in wrestling, amateur MMA and boxing and has multiple wins under his belt. Bellator MMA President, Scott Coker states, "Simply put, Aaron has all the makings of MMA's next great superstar, and to have him here at Bellator MMA is something special. Like many of us in the MMA community, Aaron is someone we've been watching closely over the last few years, and after sitting down with Bob Cook and his team, getting a chance to meet Aaron, and hearing his long-term aspirations, the fit became very obvious.

Pico made his professional MMA debut at Bellator NYC on June 24, 2017, at the Madison Square Garden. He lost to Zach Freeman via submission just 24 seconds into the first round by Guillotine choke

After his upset loss to Freeman, Pico moved down to the featherweight division and faced Justin Linn at Bellator 183 on September 23, 2017, He won the fight via knockout in the first round via Punch.

He faced Shane Krutchen at Bellator 192 on January 20, 2018. He won the fight via TKO in the first round,with a brutal left to Krutchen's body.

He faced Leandro Higo at Bellator 206 on September 29, 2018, He won the fight via technical knockout in round one again with punches.

He faced Henry Corrales at Bellator 214 on January 26 2019, Despite dropping Corrales early in the bout, Pico lost the fight via knockout in the first round only Seconds Later.

His Long-term aspirations are to Own A Horse Ranch With Many Horses and also have Many Kids with his Wife. He Currently only owns 1 Horse at the Moment which he rides every Morning.