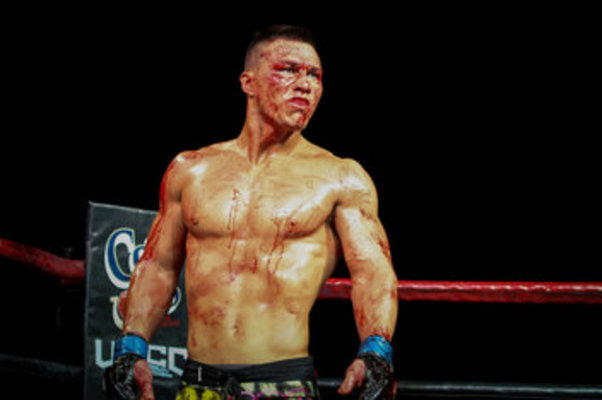 Fighting for a major organization has made Lowen Tynanes ineligible for regional rankings.

The 5'10" Lowen Tynanes is a powerful, Hawaiian-born wrestler. Back at home he was originally best known for being the wrestling state champion, until he decided to enter Mixed Martial Arts at the early age of 18, citing as the reason his father - both his idol and inspiration. He quickly amassed an impressive amateur record (4-0 according to Sherdog or 6-1 according to the UG) with most of his victories coming from the TKO stoppages.

Tynanes' pro MMA debut ended in a decisive decision win over Yosuki Suto, but he really burst on the scene with his next victory, a brutal, bloody beatdown laid on the 12-2 URCC Welterweight Champion Eduard Folayang, which made the doctor stop the fight in the first round. He followed it only 2 months later (in February 2013) with a 3 round war against a South African Muay-Thai specialist Vuyisile Colossa at the ONE FC 7 event. The fight saw both fighters exchanging takedowns, kicks and punches, until in the third round Tynanes ultimately overpowered his opponent taking him to the ground early, landing some heavy punches and finally winning via a rear-naked choke.

His next fight took place the KOTC event in California, again only 2 months after the war with Colossa. Tynanes defeated Kris Armbrister by an arm-triangle choke submission in the first round, taking the promotion's vacant Junior Welterweight (160 lbs) Championship in the process.

Keeping up his busy 2013 schedule, Tynanes next faced Felipe Enomoto at ONE FC 9 on May 31st. He won the one-sided fight in the first round after quickly taking his opponent down, securing a crucifix position and raining down multiple undefended punches and elbow strikes which ultimately made referee Yuji Shimada stop the fight.

He was next scheduled to defend his KOTC title on July 5th at KOTC: Worldwide against Joe Condon, but the bout was cancelled just within a week of the event for "unknown reasons". Tynanes has not fought for the remainder of 2013 (apparently keeping the KOTC belt, since there was no word from the organization about stripping him of it), but in early December he has informed his fans that he's planning on having a fight in early 2014 (not specifying the opponent nor the organization) and that in the meantime he is keeping busy.

It was later revealed that Tynanes engaged in a long contract dispute with the KOTC promotion who apparently owned a contract stating he had signed with them a 3 year deal. This alleged contract, never before seen (nor obviously signed) by Tynanes predated not only his single KOTC fight, but also his entire ONE FC career and was apparently the work of his (now former) manager without any consultation with the fighter. Both sides finally came to an agreement in September 2014 and Tynanes agreed to a much shorter term deal with KOTC and has been slated to return, after an over year of absence, to the cage to face the KOTC Lightweight Champion, Victor Meza on October the 2nd.

His opponent for the return fight was changed for the unknown reasons and Tynanes ended up facing the undefeated (3-0) Jeff Sweeney. He made his presence known by submitting Sweeney in only 71 seconds.