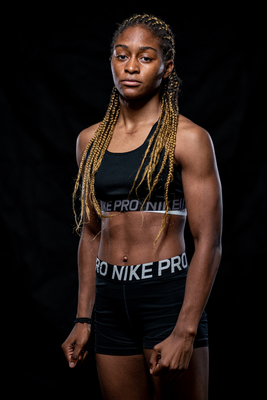 With her slim frame, long braided hair and radiant smile, 18-year-old Shanelle Dyer looks like she wouldn’t hurt a fly.
But put her in a mixed martial arts ring and the ambitious young fighter becomes a dangerous weapon.
Shanelle  is one of the growing number of female cage fighters hoping to make big bucks from the sport – which can pay in excess of £20,000 per fight.

The teenager – who was featured in the BBC3 documentary "Inside the Cage: The Rise of Female Cage Fighters". started training at nine and has already taken part in over 100  bouts.

She told The Sun that two of her primary school classmates were stabbed to death in the last year.
She sees the sport as a ticket out of the crime-ridden estate in West London, where she lives with her parents and five siblings.
Shanelle says becoming a cage fighter in her teens saved her from a future of “hanging around with my friends and doing incorrect things. ”She reveals she is desperate to leave the neighbourhood. “People I have grown up with, people that I went to primary school with, have become victims of knife crime,” she says. “Two people I know have been killed and it's unbelievable in this area. I don't want my siblings and myself to be victims.
“It makes me feel scared and I just want to move out. I don't want to be around this environment.
“My mum is always worried about where we are and doesn’t sleep until like the last child is in at night. We have curfews and my younger siblings aren't allowed to go around the estate past a certain time.”
Shanelle puts the soaring  knife violence down to a lack of role models for kids.
“I've been lucky because my parents surrounded me with people that influenced me in a good way and made me want to achieve amazing things.
“But kids round the area see people doing knife crime, getting involved with drugs and that’s the only influence they have.”
As a child, Shanelle and her siblings were taken to the boxing gym on a Saturday by supply teacher dad Richard, “to give the missus a break.”
At the age of nine, Shanelle was already a talented kickboxer and competing in her first amateur matches.
“Everyone was scared to get into fights with me at school,” she said to the Sun Online. “I had three bouts while I was still at primary school and everyone was like ' don't mess with her she's a kickboxer’.”
At 12 she took a break from the sport but, when she began to get in trouble at school because she was “bored”, her parents suggested she went to a new gym, where champion mixed martial arts fighters trained.
“I was suddenly surrounded with world champions - so many inspiring people that I just fell in love with the sport again,” she recalls.
While both parents supported her decision to compete, and have spent “tens of thousands” on equipment, travel and training fees to get her fighting fit, she says her mum refuses to come to the bouts.
“I'm really lucky I haven't really had a major injury yet, just a couple of sprained ankles and a lot of bruises” she says.
"I've seen a lot of people get knocked out, get broken noses and heads split open and they bleed a lot. I don't cringe away because I think it's amazing. My adrenaline is pumped up when stuff like that happens.
“But mum always worries about me and she's scared to see me get hurt. Sometimes I show her videos of my fights and she cringes if I’m getting hit.”
As an amateur at the beginning of her adult career, Shanelle is yet to earn the big bucks.
The aim is for Shanelle to build up her profile with bigger fights and to get a contract with the UFC.

“That's when the big money will start coming in so hopefully in the next five or six years I can get a house and finally move away.”