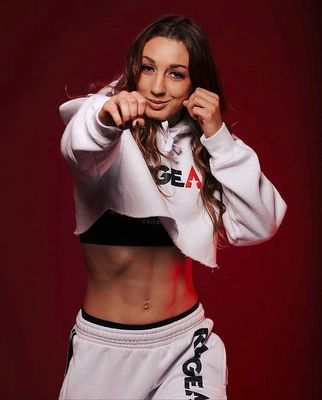 Fighting for a major organization has made Juliana Miller ineligible for regional rankings.

Juliana Maia Miller is an up and coming fighter in the UFC Women's Flyweight Division. Miller was raised by her grandmother in her early childhood and they would watch professional wrestling together. Miller was particularly drawn to D-Generation-X. Miller moved to Alpine, California when she was six and had an unstable upbringing living with her parents. Miller was drawn to martial arts as a means of self-defense because she was told as a child that the world was a dangerous place and she should carry a gun. Miller didn't like that idea and took up Brazilian jiu-jitsu. She believes every women and every child should learn martial arts for self-defense and held a women's seminar at 10th Planet Jiu-Jitsu after winning three amateur fights. Miller started training MMA after getting out of an abusive relationship. Miller's various struggles inspired her nickname "Killer," exemplifying her kill or be killed mentality in the Octagon.

Miller made her amateur debut in 2017, going 6-0 with three wins by unanimous decision, two by submission, and one by TKO. She made her pro debut at California Cage Wars 13, defeating Sadie Hubbard by rear naked choke in the first round. She went 1-1 in Invicta FC, defeating Kendal Howell by armbar (Invicta FC 43) and losing to Claire Guthrie by unanimous decision (Invicta on AXS TV: Rodriguez vs. Torquato).

Miller appeared as contestant on Season 30 of The Ultimate Fighter. She was a member of Julianna Pena's team. Miller avenged her loss to Guthrie and submitted Kaitlin Neil via kimura to reach the TUF Flyweight Finale. Miller face Brogan Walker-Sanchez on the main card of UFC Fight Night: Santos v. Hill. Miller dominated Walker-Sanchez on the ground and in the clinch, earning a third round TKO with ground and pound. Walker-Sanchez and Miller were bitter rivals on TUF, and Miller celebrated her victory in the moment my standing over Walker-Sanchez and giving her the D-Generation-X crotch chop. Miller's TUF 30 win earned her a UFC contract.