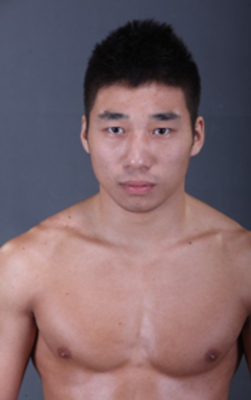 Zhikui Yao is ineligible for regional rankings due to inactivity.
Fighters must have at least one completed MMA bout in the past two years to be ranked.

Zhikui Yao is the younger brother of Honggang Yao.  For years Honggang would bring Zhikui with him to train Chinese wrestling and then at China Top Team where he trained alongside Tiequan Zhang, the first Chinese UFC fighter.  Now at 23 years old, Zhikui is nationally ranked in shuaijiao (Chinese wrestling) and was also recently a member of Team Sky Dragons on The Ultimate Fighter China under head coach Tiequan Zhang.

He competed at featherweight on TUF China even though flyweight is his natural fight weight, a twenty pound difference.  In episode 7 (Aired 1/11/14) Zhikui Yao KO'd Allen Chong in the 1st round.  In episode 11 (Aired 1/24/14) Jianping Yang won a 3 round unanimous decision over Zhikui Yao in the semi-finals.

Zhikui Yao made his UFC debut a fight night card in Macau, China on August 23, 2014 against the undefeated Royston Wee of Singapore.  Yao lost the bout by split decision.

Episode 7 Yao def. Allen Chong by KO (strikes) in Round 1