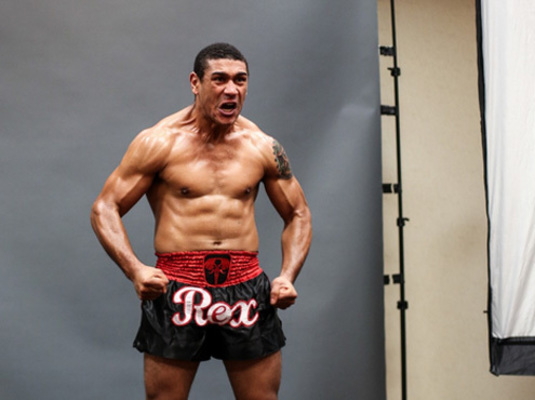 Saulo Cavalari is ineligible for regional rankings due to inactivity.
Fighters must have at least one completed MMA bout in the past two years to be ranked.

Hailing from the fighting city of Curitiba in Brazil, Saulo is as powerful and formidable as any striker Brazil has ever produced. Renowned for his vicious body punches, and stinging body and low kicks, he mixes his combinations well and can absorb tremendous punishment while also returning fire with strikes of his own. With an amateur kickboxing record of 18-2 he turned pro and achieved great success on the Brazilian Muay Thai and Kickboxing circuits. After building a solid record and reputation, he was picked up by premier striking promotion "Glory Kickboxing" in 2013. As of 2017 he holds a pro kickboxing record of 60 - 6 with 18 wins via ko/tko.


Debuting at 'Glory 11: Chicago' as an underdog against the Belgian, Filip Verlinden - he defeated Filip via decision before knocking out well known journeyman Mourad Bouzidi in his next fight at 'Glory 12: New York'.

After 2 good wins, he would fall short against the infamous Dutch/Surinamese striker Tyrone Spong at 'Glory 15: Istanbul'. Despite the loss he next entered the 'Glory Light-Heavyweight Contender Tournament'.

In Oklahoma city, the 'Glory 18 - Contender Tournament' took place, where Cavalari first defeated German/Congolese phenom Danyo Ilunga via decision in the opening round. Later that night - he then knocked out the feared and dangerous Zack Mwekassa via head kick in the finals, which crowned Saulo as the tournament champion, granting him a shot at the LHW-belt.

At 'Glory 20: Dubai' he defeated the skilled Arterm Vakhitov, via split decision, becoming the Glory Light-Heavyweight champion, and followed up with a rematch victory over Zack Mwekassa via decision at the 'Bellator MMA & Glory: Dynamite' event in San Jose.

At 'Glory 25: Paris' he fought in a rematch against Artem Vakhitov, but this time would lose his belt via 5 round decision against the Russian.

He would rebound however, with a solid victory over a tough Dutch journeyman in Brian Douwes, at 'Glory 34: Denver',  granting him a rubber match against rival Artem Vakhitov at 'Glory 38: Chicago', of which he unfortunatly lost again, this time via tko in round 2.

At 'Glory 43: New York, he faced off against an experienced veteran in Pavel Zhuravlev, which was a rematch of their 2012 contest at the "K1 World Grand Prix in Tokyo - Final 16" event. Once again, Cavalari would come up short against Zhuravlev, although he had his moments in the fight, stunning the Ukrainian early on, and punishing him throughout with kicks, but was unable to overcome the Ukrainian's momentum, losing the fight via judges decision.