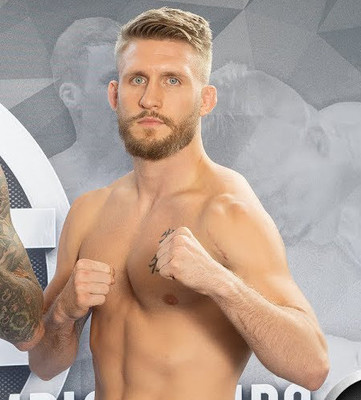 Fighting for a major organization has made Cody Law ineligible for regional rankings.

Cody Law is an American professional mixed martial artist and graduated collegiate wrestler currently signed to Bellator MMA.
As a folkstyle wrestler, he was an NCAA Division II champion and two-time DII All-American out of University of Pittsburgh-Johnstown and a PIAA champion as a high schooler.
Law attended Forest Hills High School. He didn't have particular success as a freshman, posting a negative record (16 wins, 17 losses) and placing sixth at districts. He improved his resume as a sophomore, posting a record of 26 wins and 7 losses and placing third at districts and sixth at regionals, but still not qualifying for state. He kept improving as a junior and posted a record of 36 wins and just 2 losses, the first one on the districts finals (finishing as the runner-up) and the second one came after winning the regionals and reaching the PIAA state finals, where he lost by only one point. As a senior, he had his most successful season, posting an unbeaten record of 34 victories and no defeats, placing first at districts, regionals and the state championships.
Overall, Law posted 112 wins and 26 losses during his career and was in the top 15 of the national high school rankings at 160 pounds.
After finishing his high school education, Law attended Pennsylvania State University, that is known for having one of the most successful wrestling teams at the time, having won the NCAA Division I's team titles in the last three seasons at that time. As a redshirt athlete (13'-14'), he compiled a record of 14 victories and 4 defeats in Open tournaments. He then competed as a freshman at 157 pounds, compiling a record of 13 wins and 6 losses during regular season and not competing at that year's NCAA DI championships.
at that year's NCAA DI championships. After wrestling season, he competed at the 15' Junior Nationals, where he placed third.
After that season, he chose to transfer to the University of Pittsburgh-Johnstown, that had an NCAA Division II wrestling program. He explained:
"It is a combination of things... My goal is to be a national champion. I wasn't getting the job done there... They're going to win (the team title). I really believe they will, but at the end of the day, my goal is to be an individual champ, too.".
However, this led him unable to compete as a sophomore.
As a junior, he became the top-ranked wrestler in the country and posted a record of 17-1 during regular season. During post-season, he won a PSAC conference title and became an All-American with a fourth-place finish at the NCAA DII championships. As a senior, he had his most successful season, compiling a record of 25 wins and 2 losses (both of those losses to Division I athletes), winning the National Championship and becoming a two-time All-American.
Law began his amateur MMA career a couple of months after he graduated from UPJ and amassed a 5-0 record with three stoppage wins (two submissions, one knockout) and two decisions. On September 1, 2020, Law announced that he had signed a contract with Bellator MMA.