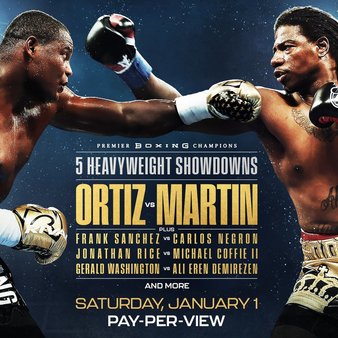 How the hell is this a PPV?

How the hell is this a PPV?

If it was Tito Ortiz, then it should have been a PPV.

But with it being Luis Ortiz - as John McEnroe would say: You cannot be serious!

Ortiz vs. Martin
Charles Martin, DEC
People are awfully confident in a man who is touching 60!! Only half joking about Ortiz age! Everyone knows he's older than 42, how much is the question??? I may start the year by taking a flyer on Old Prince Charles! Like I said Ortiz is close to pensioner age and never ever forget, Martin Walks Dis Earf like a GAWD!!!!!!!

Sanchez vs. Negron
Frank Sanchez, TKO, R4
The best Cuban Heavyweight on this card and the guy who should be top 10 rated

Rice vs. Coffie II
Jonathan Rice, TKO, R8
Johnnie beat the absolute **** outta Coffie just 6 months ago, what's changed since then??? Sometimes instant rematches are different, majority of the time the results are the same.

Martin vs. Duno
Frank Martin, TKO, R7
Frank Martin is a good under the radar guy to keep an eye on. Doesn't get much attention, at the moment anyway but I think that's going to change if he has an active 2022. Real nice boxer puncher

Here's the algorithm I used for this: https://docs.google.com/document/d/1KpKQpYQm8PK4bfK4-mxwVVTr7LgINExitXx7YufVgvY/edit?usp=sharing

Should be able to view it now

TJ Bro, if Negron KO's Frankie Sanchez in 5 I'll, I'll, well I don't know what I'll do!!! But I will be extremely surprised and that will be the upset of the Year on the 1st day of the Year!!! Ha

Also, I looked at your document, do you take strength of schedule into consideration or just the method of victory??

The whole breakdown is at the top of what I do.

Pero vs. Bruzon
Geovany Bruzon, TKO, R4
Wierd match up!? 2 decorated Cuban amateurs, both Bangers!!! Both decent looking prospects. Hmmm, not very boxing like, not complaining tho! I'll tell you that Pero has the better amateur record Multi time Cuban Heavyweight Champ, wins over Co Main eventer Frank Sanchez, over 200 ammy wins(BoxRec has 100 but they don't record every amateur fight) , Bruzon, IMO, has the better pro style, also remember Yoelvis who wrecked Clay Collard on Xmas night? Well Bruzon is from his gym, same management, trainer and style. I'm very interested in this fight, hope it stays together!

Sorry TJ, I missed that!!
Hope you've cracked the code!!

Sanchez vs. Negron Changed from Confirmed to Cancelled


PBC posted the full fight of Coffie vs. Rice the other day.

May help anybody who has still to make up their mind about how this rematch will go.  Rice was a late replacement, I think 2 weeks?  Coffie was given his 1st PBC Fox main event as he was building some hype after a string of KO's, especially the highlight reel Uppercut KO vs 17-0  Darmani Rock.  Plus they were pushing the fact that he's a former Marine, most be a Veteran fan base??

Jonnie Rice was an established journeyman/opponent for rising prospects.  Always gave guys a good test, travelled all over the World from USA, Canada, Mexico even Australia!  would beat you if you weren't at a certain level.  He put on a career best performance here. 1 of the biggest boxing upsets of 2021, I think top 10? He was anywhere from +750 to +1000

I agree with your assessment Mikey, but I just feel like Coffie is going to be well prepared this time around.

Also I’m surprised that you picked Martin and Washington since I thought that you would have Ali and Ortiz instead.

All my picks are subject to change!! Ha

But at this point in time I believe Rice does it again!
The records on paper don't show it but Rice is a far better boxer than Coffie. Also, the confidence that 1st fight will have instilled in Rice and the opposite for Coffie makes me feel like the same thing happens.
I think Coffie best chance is landing a power shot which, its Heavyweight, good chance that happens

I do not rate Demirezen at all! His record is a classic "looks good on paper" boxing special!!! The guys he has beaten with the good looking record, Milacic, Redzovic, Rashid are all crap!!! They are guys who win fights in small halls in Germany, Bosnia, Latvia, Serbia etc.
Of course, I'm not saying Gerald Washington is a World beater, he isn't!!!  He's a former American Footballer (not sure if he was NFL or just high level College?) who came to boxing late. So he's athletic, quick and powerful but doesn't have the technical boxing base.  He has a great KO win over Helenius that is making me favour him, again tho, I may change my mind.

As for the main event. It's the same thing, I'm not convinced in either guy? So I sometimes just jump on the underdog!!

Thank you for the insight Mikey. I’ll go with Washington now since he’s the PBC fighter 😂

No worries.  Just Don't put it on me if Washington loses tho!!!! Ha

True but you’re the boxing genius on Tapology Mikey.

I don't know about that mate! Yeah, sometimes I have managed to get some big underdogs but I have made some dumb ass predictions too!!! Haha