UFC on ESPN+ 32: Hermansson vs. Weidman 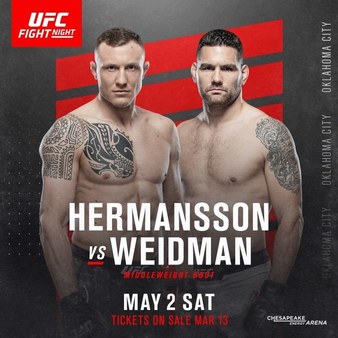 Alpar vs. Santana Changed from Confirmed to Cancelled

Weidman vs. Hermansson
Jack Hermansson, TKO, R1
Weidman's chin is gone. I don't see this one going past the first.

" Stephen Quadros: "How long have you had that mustache?" Don Frye: "Since I was 5. I got it from my mom's side of the family. She's not a pretty woman.""

Weidman vs. Hermansson
Jack Hermansson, TKO, R2
Chin is going to be a problem for Weidman I think Hermansson will try grapple with him and ground and pound him but if he doesn't succeed he will maybe KO him on the feet

Weidman vs. Hermansson
Jack Hermansson, TKO, R1
they are literally trying to kill Chris, award him the Urban Legends Belt that was supposed to go to JDS!?

The current 125lb FCF CHAMP deserves to be on this card in his home state! He has so much support here he can get so many new viewers and tickets sold to this card in OKC. Somebody do something and get this guy the shot he deserves! #BestintheMidwest #TEAMBRICK


Chris Weidman should have been cut roughly a year ago and is probably only still in the promotion as a favor to Dana's roid buddy Serra. That said, he's got a shot in this one because it's a quasi-favorable matchup for him purely on the basis that Jack might try and eg-wrestler him and there's a 60% chance he'll lose that contest. If that doesn't happen and it stays standing then Weidman gets pieced up and put away between the 3rd-4th round,


Claudia Gadelha sounds like Barry White, and probably fights like him these days, too. Frankly I'll be staggered if Marina doesn't punch the absolute living **** out of her brutally here for a KO/TKO within two.


"Language is a form of communication--Israel Adesanya."

Gadelha's cardio is TERRIBLE by UFC standards. I can understand not many people maintaining pace for five rounds, but a 1.5 Round of cardio is inexcusable. As of late, it's making her fights feel more competitive than need be.

It used not to be. Whatever she was on has seemingly worn off.  Stamina is gone and all she's left with is a rich baritone, a mole that is more akin to the animal than the blemish and presumably a sack like a bag of pennies.

Lot of people picking Hall by sub but Lamas is extremely competent on the ground and Hall hasn't really done much finishing in the UFC.

Weidman vs. Hermansson
Jack Hermansson, TKO, R4
Poor Weidman really needs this. I never really liked the guy, but now it's a little bit sad to see him get ko'd almost every fight.

Emmett vs. Barboza
Edson Barboza, DEC
Amazing fight. I really hope Barboza can be healthy at featherweight... If so, it would be amazing to see how he can go. Emmett is a great first test.

Weidman vs. Hermansson
Jack Hermansson, DEC
A bit of a lackluster main event to end an outstanding card. Looking at Weidman’s chin, slowness, and washed up striking, and average wrestling that used to be top notch, I think Jack Hermansson will put on a replica performance similar to the Jacare one

Gadelha vs. Rodriguez
Marina Rodriguez, TKO, R3
Claudia used to be a killer, but she lost her pop and has lately become a washed up gatekeeper. Marina is fast, ferocious, and most likely will win this co main event

Arlovski vs. Lins
Philipe Lins, TKO, R2
I really am biased with Andrei and loved him throughout his career, but to pick realistically, I am going with Lins. I saw his PFL career, and even though he just looked like an average heavy slobber knocker with power, I think he will retire Andrei and knock him out cold. Lins is still not someone I am completely sold on, so don’t get the wrong idea here. I just think Andrei is washed up, and below average at this point.

Hall vs. Lamas
Ryan Hall, DEC
Amazing fight on paper. Lamas is a killer, and has great wrestling, as well as fairly good boxing. Hall is well, crafty for certain, with heel hooks, rolls, and wild kicks and little to no boxing in his game/Arsenal. It could be a jab fest upset W for Lamas, which was my initial thought, but it will most likely be a mix of wildly entertaining kicks on display with plenty of sub attempts for a Dec win for Hall

Ferreira vs. Dober
Diego Ferreira, SUB, R2
I love Dober. He is everything you want in a fighter! Power, aggression, humbleness, respect, fun to watch, etc. But in my opinion, Ferreira is just the better fighter. He has okay, sort of average stand up, but his ground game is scary good. If it stays on the feet it will go to Dober, and vice versa.

Emmett vs. Barboza
Edson Barboza, TKO, R2
Wow. What a fight! Outstanding addition to an already filled up card. Emmett is a wrestler with power, and that’s just about it. Pretty average, like most wrestlers. Just a TD artist who has a right hand. It’s pretty much the opposite with Edson Barboza, whom has a very technical and dangerous stand up game, and is an elite fighter. Wheel kicks, spin kicks, and leg kicks that resemble baseball bats, as well as round kicks. I think Barboza will stuff Josh’s Takedowns, and punish him on the feet, countering his looping right hand.

Alpar vs. Melo
Vanessa Melo, DEC
Pretty much a meh fight for me. This is the one bad fight out of all of em. I’ll study Sarah a bit more, and Melo never impressed me. I know Melo, so I think she will win. Who knows? Better question is, who cares?

Jung vs. Herman
Da Un Jung, TKO, R3
Solid one. Jung has had me impressed. Solid stand up with huge power. Herman is average, but his best bet is to grind out Jung to a UD in the wrestling department, which I don’t think will happen.

Mitchell vs. Rosa
Bryce Mitchell, DEC
Another fun one! Thug Nasty will grind out a dominant yet fun decision, mixed with flashy strikes, beautiful ground work, and ground and pound

Weidman vs. Hermansson
Jack Hermansson, SUB, R3
Nah strikes to takedown to sub if someone starts windmilling it will be widebody and jack is as vulnerable as him to ko.

Arlovski vs. Lins
Andrei Arlovski, TKO, R2
Damn can Arlovski get an easy fight..like ever? Hes got reach and skill advantage what the hell!

"You can do anything all you need is will power"

Arlovski vs. Lins
Andrei Arlovski, TKO, R3
As the song says "Never gonna give you up never gonna let you down never gonna turn around and hurt you"

If this card doesn't happen, I will turn to alcoholism and retreat to where I once came.

@Axl702 So what kind of Alcohol will be your drink of choice? I like Bourbons and dark liquors, not so much beer. Start thinking about it now while you have time :)

"Dont take life too serious, you will never make it out alive"