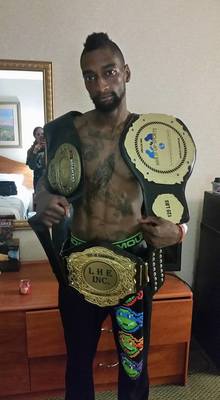 Let me tell you about myself. Roosevelt is a mixed martial artist from a very young age which led him to his first Bando Nationals karate tournament in 1996 and placed 3rd overall.


In 2005 the year Roosevelt would make his debut in amateur boxing and continue to grow until he met a new form of combat in kickboxing and mma in 2009.

I didn't take long for Roosevelt to climb the ranks and in 2010 he fought for the Hard Knocks 147 kickboxing championship and won 2nd round ko!

Threw out the next few years Roosevelt played with the right weight class for himself. In 2013 he made his way to his first mma title for the 145 Gladiators of the Cage Championship but fell short in a guillotine choke but that didn't stop him.

Threw 2014 he made his debut both as professional in boxing and kickboxing but injuries kept him from competition. The injuries also was a blessing for more motivation and determination to be the best possible person he could be.

The beginning of 2015 Roosevelt took a fight vs a very game opponent in Nikola Gionti at EFP mma in ohio and it's was a very short night as Archie learned a lot from a triangle choke loss and it was his first cut to the 125 weight division but that was the weight class that he belongs to be in!

July 2015 Roosevelt was back with a vengeance and came to take the Mix it up Sports 125 Championship, The fight lasted 225 of the first round via KO and became the new 125 pound champion.

November 22 2015 We were at the Sprawl and Brawl 125 Championship versus an undefeated Jake Lemacks of Mma Institute in Richmond Virginia. The lights was set and Roosevelt beat out Jake with and 37 sec KO in the first round to become the new 125 sprawl and brawl champion,After the fight Roosevelt announced his Pro debut in mma for Elite Warrior Challenge in Salem Virginia on January 2016 also live on pay per view!  SPONSORS: REVGEAR  DOUMACHY FIRST KLASS NUTRITION  THE FIGHT DOCTORS  EMILY SMITH MARY KAY S&S CONTRACTING