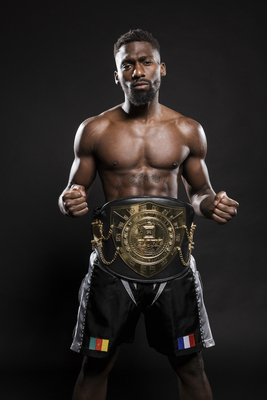 Doumbé who is of Cameroonian/French descent, has a background in Kickboxing, winning many tournaments and fights over the years. Prior to fighting in Glory Kickboxing, he would become a 3 time A1 World Combat Cup Champion, and 1 time finalist, a World Kickboxing Association European and World Champion, and a WAKO Pro World K1 rules Champion. He was also the 2016 Liverkick.com fighter of the year.

Debuting at Glory 22, he would lose a decision to Yoann Kongolo, before rebounding with a victory over Dutch standout Murthel Groenhart at Glory 28.

After this he would register 8 regional wins before going on to fight for the Glory welterweight Championship, earning a split decision over renowned Dutch striker Nieky Holzken at the event - Glory Collision. He would then go on to avenge his earlier loss to Yoann Kongolo, before earning a 2nd split decision victory over Nieky Holzken.

Doumbé announced at an Empire Fight event in France on October 3, 2021 that he is training for a switch to MMA. He also said his kickboxing career is over. He finishes his Kickboxing career with a record of 75 - 7 with 45 wins by stoppage, and a Glory Kickboxing record of 12 - 3, but would avenge all 3 of his losses within that promotion.