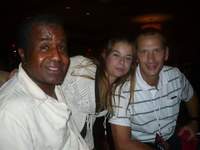 What is this? 1st Degree Coral Belt
my rank

I was raised in the Korean Arts by my father in Tang So Do throughout the 1970s and 80s.

I started teaching boxing in 1984 full time,after the 84 Olympics.

As with many old school boxing fans I was fascinated by UFC 1,and by the time the new Zuffa regime took over,I was a Pride fan and already devoted to MMA and merged my boxing training into Striking Coach for MMA fighters.

Mma still has a long way to grow in the striking area. For example,simple little things that need to be bred through training.

I trained under Emanuel Stewart at the Kronk in the 80s and 90s .

The basic things we learn is are,

BEGIN and always END with a hard jab. Whenever i see it applied in MMA ...surprise surprise they land. Other basics are Step in with the jab,or parry off a jab. And lastly is HOOK off the JAB. In MMA its a Elbow off the Jab.