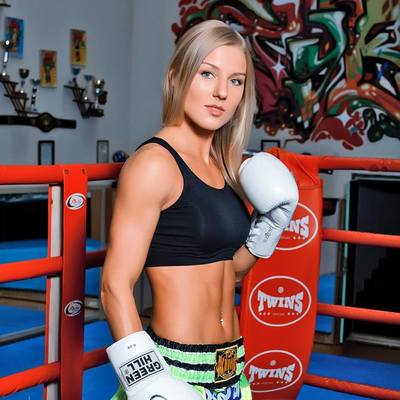 Ekaterina Vandaryeva (born January 20, 1991) is a Belarusian kickboxer who defeated future UFC champion Joanna Jędrzejczyk in a controversial judges' decision to become the WKN champion in 2011. Before participating in Muay Thai, Ekaterina Vandaryeva had been involved in volleyball, athletics, self-defense. She graduated from the school of choreography.  Ekaterina Vandaryeva began kickboxing at age 16, in 2007, with the Minsk club "Kick Fighter Gym" Ekaterina Vandaryeva wanted to enter the Police Academy, but later chose the Belarusian State University of Physical Training (specializing in tourism management);which she graduated in 2013. Vandaryeva first coaches were World and European champions Andrei Kulebin and Andrei Kotsur. It was they, who have made her a champion. The first professional fight Vandaryeva participated in was in Cyprus against a Greek. She became a World Champion for the first time in Thailand in 2009, a year after she had begun kickboxing. Her favorite award “Best Fighter World Cup” is the award of the prestigious version – IFMA. Ekaterina Vandaryeva was awarded by the King of Thailand on his Birthday at his palace, in the presence of members of the royal family.