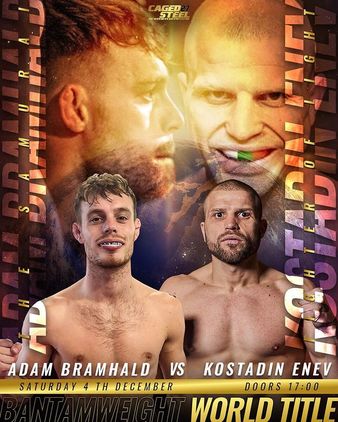 Gibson vs. Murray
Connan Murray, TKO, R1
He's not exactly the best fighter in the world and it's likely he loses but trust me, you don't want Ashley Gibson to pick you up or else this might happen.....

Acton vs. Wood
Mark Wood, SUB, R2
I can't not pick the "British Butterbean" Mark Wood! As for the submission pick, he's primarily a Sambo wrestler and has competed in numerous Sambo tournaments. Jamie Action is fighting out Atherton Submission Wrestling so I'd expect his ground game to be decent as well. I'll pick Mark Wood though. The fact he's a Heavyweight Sambo wrestler is giving me some Fedor Emelianenko vibes and that combined with his nickname of the British Butterbean makes it a criminal offence not to pick him! Is he a mix of Fedor and Butterbean? I certainly hope so!

Tapology members can make predictions for upcoming MMA & Boxing fights. Caged Steel 27 is closed for new predictions. 43 total members made predictions on this event, breaking down as follows below.

Leaderboard of the best predictions by member: Caged Steel 27 Leaderboard