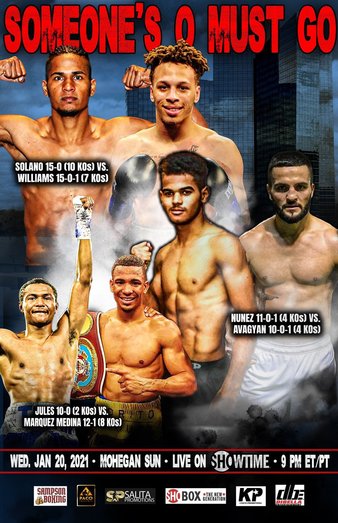 I hope you know that I am only joking my man


Featherweight Pedro Marquez is unable to participate in his scheduled eight-round showdown tonight against Martino Jules due to illness.
The telecast will proceed as a two-fight card beginning at 9 p.m. ET/PT and is headlined by Yeis Solano (15-0, 10 KOs) making his super lightweight debut against the first undefeated fighter of his career in East Hartford, Conn.’s Mykquan Williams (15-0-1, 7 KOs). The co-feature has Panama’s unbeaten Jose Nunez (11-0-1, 4 KOs) facing decorated amateur Aram Avagyan (10-0-1, 4 KOs) in an eight-round super featherweight match-up.


The old saying “life isn’t fair” is a reality that we’ve all had to deal with at some point, but most haven’t had to experience that sad certainty as early as boxer Mykquan Williams.

Williams (15-0-1, 7 KOs) is readying to make his national boxing television debut on Showtime’s ShoBox on Wednesday, Jan. 20. The 22-year-old from East Hartford, CT, never had things easy, but his optimistic view of life and tremendous support network are propelling him towards achieving his goals as a boxer.

When Williams was only eight days old, his father was murdered. He was robbed of a vital relationship that so many of us take for granted. As a baby, Williams’ mother and stepfather cared for and nurtured him, but his biological father’s absence was painful for Williams growing up.

“It was difficult,” Williams told FanSided. “It was real, real disturbing that I just knew of my biological father and not actually knew him, himself.”

Williams’ learned more about his father as he got older. His mother told him more as he aged. Williams would also hear stories from friends in the neighborhood, which helped him better process his father’s loss.

“When I run into people a lot of the times that knew my father, I’ll always hear stories about him and stuff like that,” said Williams. “So that makes me feel good. That’s pretty cool. You can say his legacy is still living on just from being the guy he was around his hometown.”

As cruel as life can be, it’s also filled with good-natured people who inspire and love unconditionally. Williams tragically lost his father as an infant, but his mother, stepfather, and many others nourished Williams with hopes, dreams, and guidance.

Williams’ aunt Adelita Irizarry introduced him to boxing. The Ring described that anecdote.

“When he [Williams] was seven years old, his aunt, a professional boxer who fought Cecilia Braekhus in 2008, took him to a boxing show,” wrote The Ring.

Mykquan Williams is poised to make his mark on boxing when he fights Yeis Gabriel Solano in the ShoBox main event
His aunt’s passion for boxing rubbed off on Williams as a child, and he asked to start training. She connected Williams with trainer Paul Cichon who has been in his corner ever since. In the over 15 years that they’ve been together, Cichon has transcended a boxing trainer’s role. There’s a love and trust present not found in most trainer-fighter relationships.

While talking to FanSided, Williams described Cichon as “a father figure.”

“[Cichon is] someone I can just go to about anything, talk to him about anything, ask him whatever, tell him anything,” said Williams. “He’s a father figure, best friend, all in one. I’ve been around him since young since seven going on eight. He was always there, always knew everything about me. Since the beginning though, he’s always treated me like one of his.”

Williams found success as an amateur under Cichon’s guidance, and Williams caught the eye of promoter Lou DiBella and famed boxing manager Jackie Kallen. Williams has known Kallen since he was a 13-year-old amateur. Her discovery and time with James Toney is well documented, and was the subject matter of the 2004 film Against the Ropes. Kallen felt like a natural fit to be Williams’ manager when he turned professional. She brings more than boxing knowledge to the table.

“It’s always positive,” said Williams. “She’s always giving me advice when it comes to business stuff and financial stuff. There’s a life after boxing, obviously. And some of the stuff she tells me is great information that I can take with me afterwards.”

With everything falling into place, Williams is ready to put his boxing skills on display for the world to see. Williams’ opponent Yeis Gabriel Solano (15-0, 10 KOs) is the toughest test of his career. Solano is a hard-punching fighter from Colombia who presents a stiff challenge. Williams knows that a good showing could snowball into more opportunities, but he’s taking the pressure in stride.

“It’ll open a lot of doors and eyes in the boxing world toward me,” said Willaims. “We don’t expect anything, but I know that putting on a great performance would definitely open a lot of eyes and doors for me in the future.”

Williams’ road hasn’t been easy, but he’s in a good place because of the love and help from those in his inner circle. His heart, positivity, and fists will do the rest.

Tapology members can make predictions for upcoming MMA & Boxing fights. ShoBox:The Next Generation is closed for new predictions. 97 total members made predictions on this event, breaking down as follows below.

Leaderboard of the best predictions by member: ShoBox:The Next Generation Leaderboard