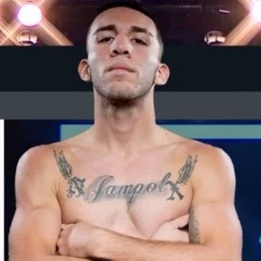 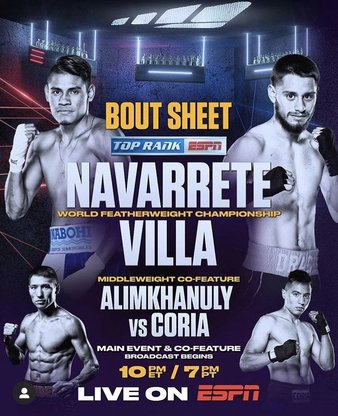 Sorry Jay bud, I don't agree with you on the scores. I think those 2 knockdowns sealed the fight. Plus Villa was running too much and would only throw a jab
If he had thrown combination, even a simple 1,2 when Navarrete was missing with wild swings and out of position, which I was hoping he would for my prediction!
But he let Navarrete bully him around the ring all night, I think those knockdowns had a him to worried to throw back.
I do agree with you about the commentary being a bit off. It was like they were amazed at Navarretes wild, unorthodox **** and would ignore Villa's footwork and jab.

But, again I think Navarrete clearly deserved the win, by 21 or 2rounds, along with the 2 10-8's that's a pretty clear win

Enjoying all the analysis above, agree mostly but Navarette takes this one easily

I appreciate your response Mikey, but what I saw in the Rounds stated and especially from Round 6 / 7 was Navarette pressuring Villa and throwing wild swings and missing by some distance most of the time, whilst Villa boxed and moved and did connect with a few nice combinations flush on the chin of Navarette, as Navarette was leaning heavily over his front foot, which he has a tendency to do... The commentary was so biased... Everytime Navarette threw anything and I do mean anything, the commentary team talked about it being a point scoring shot... A lot of Navarette's punches throughout the entire fight missed Villa completely... My overall assessment is the Knockdowns were obviously the difference in Navarette edging the fight, but he scored 2, which equates to a 4 point difference across two rounds, yet he Won by only 2 points on 2 Judges Cards.... Takes the Knockdowns away and it would have been a draw officially, and prior to the Knockdown in Round 4, Villa was dominating the action in that Round, before being caught by an excellent shot that dropped him, that he didn't see... Overall assessment, Navarette was sluggish and used his physicality to edge the decision... He does carry power in his hands, no doubt and the Knockdowns were well delivered shots, but he did tire tremendously from Round 5 and he knew it, because he went into the fight thinking his power would be enough and expecting Villa to wilt under the pressure he would put him under... Meanwhile, Villa boxed and moved throughout a lot of the contest excellent and he still has a bright future in the sport, but he must remember that he doesn't carry power and therefore he needs to be on the move counter punching when facing a bigger puncher than himself, as being dropped in a close competitive fight obviously proved the difference between Winning and losing... 🤔🥊👊👊🥊👍Full respect to your opinion Mikey, but bullying an opponent with physicality is Not the sweet science that I appreciate... It shouldn't also score rounds if you as the fighter, spend the majority of the round pressuring your opponent and throwing punches, but missing your opponent, time after time! 👊🥊