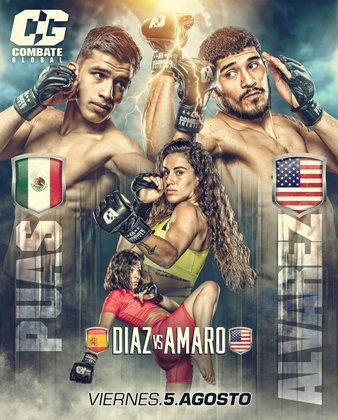 Chris Boasso vs. Axel Diaz at

Alibeth Milliron vs. Tanya Nijjar at

It's good to see Vernon Ramos fighting in MMA again and fighting in Combat that can open the way for him to be transferred to Bellator/PFL or some other international promotion, after having stagnated a bit in the local scene (UCC - Panama) after of his short stint in the UFC.
But I find it curious how the opener fight girls could probably beat the co-main event girls?
In particular: I wonder what merits a fighter with a 1-4 record could have done to fight in the Co-main and be on a flyer cover beyond training in MMA Masters and Tiger Muay Thai. It is not a personal attack, but these cases show that great fighters can come from small cities or gyms and that training in good teams does not guarantee a good career as a professional fighter.
I will keep an eye on the career of my compatriot Vernon Ramos who is back with a unanimous decision victory.
Tanya Nijjar who is now 1-0 as a pro and 2-0 as an amateur has another fight scheduled for later this month, so her management is probably looking for her to rack up victories in a short time after several cancellations for her debut fight.

Combate Global was hoping Claudia Díaz would bring in more viewers from Spain. They even used Diaz to promote the Spanish Eurosport app.

I understand that they look to the Spanish public, but it's crazy to put your trust in a fighter who has a 1-5 record now. Enrique Marin is a former UFC fighter and is currently on a 2 fight win streak (fighting outside of CG) and Kevin Cordero is coming off of beating Ricky Trays. Cordero and Marin can meritoriously be Main Event or Co-Main of any Global Combat event

Cristian Perez defeats Samuel Alvarez via KO/TKO at 3:14 of Round 3

Chris Boasso defeats Axel Diaz via Submission at 1:16 of Round 1

Tanya Nijjar defeats Alibeth Milliron via Submission at 3:01 of Round 1