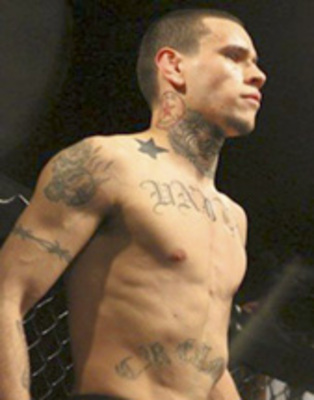 Travis Creamer is, born and raised in Harrisburg, Pennsylvania. Trains outta: Harrisburg Kickboxing Academy Nickname: "Nothing2Something" Travis went 8–1 as an amateur. Finishing 5/8 fights (3ko / 2sub). He won his amateur debut, lost his 2nd, then rattled off 7 consecutive wins to finish out his amateur career, in which he won 3 belts, in 3 different weight classes. Travis made his pro debut on February 28, 2014 vs. Alfred Alo (0–2) at 160lb Catchweight. He won his debut by way of 1st Rd. TKO (3:28) by strikes.
His 2nd Pro Fight was April 12, 2014 at XFE 39 vs. Leonard Simpson (1–1) at Welterweight, where Simpson handed Creamer his 1st career KO Loss (Pro / Am) at :38 into R2.
His 3rd Pro fight happened at WCC 16, March 5 of 2016. Marking his first fight in 2 years. He faced Sharif Jones (2–0) for the first of their two career meetings. A fight that you could say Jones was winning the round, only to get stopped by strikes, 4:52 into R1.
Creamer's 4th fight was a Rematch vs Sharif Jones (2–1) on August 13, 2016, at WCC 17 that was for the WCC 160lb Belt. Only this time, Sharif Jones worked Creamer into his first Round 3 as a professional, where Creamer succumbed to a Submission Loss, by way of Rear Naked Choke at 2:45 of R3.
Creamer's 5th fight took place October 15, 2016 at PA Cage Fight 26 vs. James Jordan (6–3). Marking Creamer's first officially scheduled bout at 155lbs. Should be noted that Jordan missed the 156lb weight limit by 1.8lbs. A fight that saw Travis go the full 15 mins for the 1st time in his pro career. But losing by way of Unanimous Decision.
Creamer contemplated retirement from combat sports as a whole, to focus on his son and family. After a long hiatus, Travis went back to training at Harrisburg Kickboxing Academy. And got himself back into fight form again, and for good reason. His return fight to the cage is a tooo good to pass up opportunity scheduled to take place September 7, 2019 in Harrisburg PA, at King Of The Cage: Capitol Punishment in front of his raucous hometown crowd against Tyler Collins (0–2) scheduled for Lightweight. Marking his 1st fight in nearly 3 years.