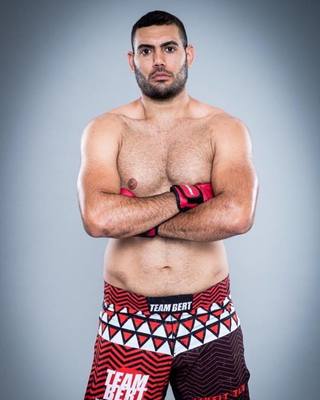 Fighting for a major organization has made Adam Keresh ineligible for regional rankings.

Summary       -  Mr. Adam Keresh seems to be the mystery man from Tel Aviv,  Israel.  The information is sparse no age, no amateur information,  not even a nickname I personally like "The hammer" if your reading Adam.  This void of data is not really suprising however its really a statement about MMA in Israel.  Fighters from this area are still lagging behind in getting recognition on the big stage.. When you think of Israel and MMA no doubt you would automatically connect  Adesanya and be forgiven for this as when you enter Israel into google Adesanya comes up as the forth entry. This seems to be a common theme that spans most of the middle east.   With the UFC holding events in Abu Dhabi in response to the world Covid 19 crisis.  The UFC and Dana White have pledged to create a permanent established presence that will remain even after the world goes back to buisness as usual and lifts the travel bans. White has even commented on opening a performance institute, no doubt the near future will see an infusion of talent from the area to all the major organizations. As of now Nate Levy 6-1 fighting for the UFC may be the the most known fighter for Isreal. Why do I mention all this because the heavy weight division has an exciting prospect in Adam Keresh who has won all four of his bouts by KO or TKO including a first round head kick of Kirill Sidelnikov who is known as baby Fedor after the legendary Fedor Emelianenko whom is his coach. Head kicks are rare but exceptionally rare for the heavy weight division. How high can Mr. Keresh's stock rise well considering the lack of representatives from his home country I would say he is in a great position to become a big star at least in his home country.  He has a big challenge in front of him however when he takes on Chad Johnson 6-3 on March 25 2022 in the PFL Chanllenger Series 6.  If he preforms well he is likely to earn a contract for PFL and a spot in the upcoming regular season.  Neither Chad nor Adam have ever had the judges get involved so it should be fireworks.