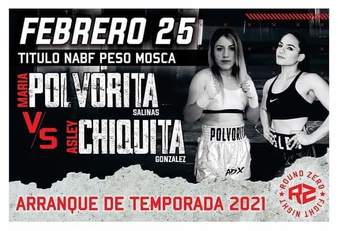 Looks like a decent Mexican Fightcard, with a mix of Men's and Female Pro Boxing bouts, topped by a NABF Flyweight Championship bout between Maria Salinas, the fighter who earned a draw with Nicola Adams in the UK back in 2019, which subsequently forced the previous Double Olympic Gold British fighter, Adams into retirement with an eye issue and hard punching Asley Gonzalez, who has 4 Stoppage Wins in 7 Unbeaten contests and as age, freshness and power on her side... I'm personally tipping Gonzalez to Win the bout this evening and possibly by Mid-Late Stoppage...
Furthermore, I see Jose Adolfo Granados getting the W, probably by Decision in his contest against fellow Unbeaten Super Featherweight Jorge Montreal, whose record looks a little padded to me... Should be some competitive bouts, as the Mexicans tend to bring the heat, especially when facing each other... 🤔🔥🥊👊👍

Tapology members can make predictions for upcoming MMA & Boxing fights. Polvorita vs. Chiquita is closed for new predictions. 37 total members made predictions on this event, breaking down as follows below.

Leaderboard of the best predictions by member: Polvorita vs. Chiquita Leaderboard