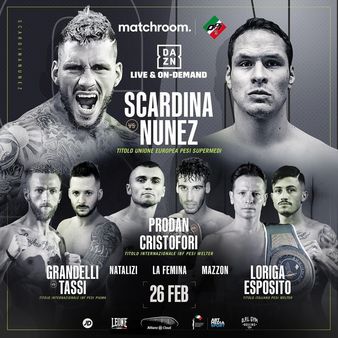 Scardina vs. Nunez
"The official Tapology discussion thread for the event!" (4 months, 4 weeks)

Replay tells a bit of a better story but I know Cristifori is devastated, damn.

That was some corrupt ******** in Prodan Cristoferi fight!!!!
This is the worst thing for me about boxing. Away fighters get screwed over all the time! They are up against the Fighter, the ref, the judges, the promoter, the crowd! It's sooooo hard to win as an away fighter!

Cristoferi was boxing Prodan up all night long, saying that the judges probably would have had Prodan winning!!!! He gets hit with 1 shot in the very last minute of the last round and the referee jumps in and stops the fight!!!!  ********!!!

Tapology members can make predictions for upcoming MMA & Boxing fights. Scardina vs. Nunez is closed for new predictions. 95 total members made predictions on this event, breaking down as follows below.

Leaderboard of the best predictions by member: Scardina vs. Nunez Leaderboard