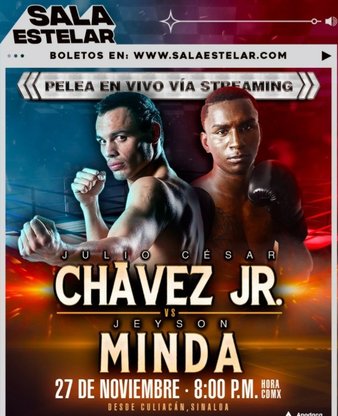 Stop the hate on Chavez junior.

I bet Chavez junior could smash u guys.
I mean on a good day he could. Obviously not any of u that have boxing experience of course- but he could outbox the rest of u *******s for sure.
Probably

Haha, maybe on a good day

But I did have 2 amateur fights 15 years ago and fought a couple of homeless guys down Windmill Brae. I think that counts for something in my favour no?

Well yes, of course he could beat me in a boxing match but the reason I'm not a fan is that he's been coasting on his dad's name and I seriously doubt he would have had the same opportunities that he's had if it wasn't for that. Of course, it would have been unreasonable for anyone to think that he could be as good as his dad but for a professional boxer with access to a lot of resources and opportunities that aren't available to most boxers, he should be doing better than he is.

Tapology members can make predictions for upcoming MMA & Boxing fights. Chavez Jr vs. Minda is closed for new predictions. 55 total members made predictions on this event, breaking down as follows below.

Leaderboard of the best predictions by member: Chavez Jr vs. Minda Leaderboard