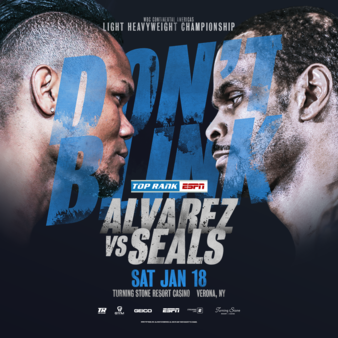 Alvarez vs. Seals
Michael Seals, TKO, R2
Don't Blink should be an appropriate tag line for this fight. Alvarez has power, he KO'd Kovalev a few fights back and though he lost the rematch, he stumbled him in that fight too. But for me Seals is the more explosive, faster power puncher. He has some brutal KO's on his highlight reel, putting guys through the ropes and out before they hit the deck! It's a big fight at Light Heavyweight too because of Canelo winning then vacating the belt he won off Kovalev. The winner of this is lined up to face last weeks winner, who no one but me picked! Joe Smith Jr to face off for the WBO World Title. I'm slightly favouring Seals to come out quick and put Alvarez out in another highlight reel KO

Bisbal vs. Vargas
Victor Bisbal, TKO, R6
This is a wierd Heavyweight fight. Usually these 2 guys are the opponent to a name guy. Bisbal has fought Breazale recently, Vargas fought Andy Ruiz and Junior Fa. They both have pretty good amatuer credentials with Bisbal being a World amatuer medalist and PanAm games Gold, Vargas was a member of Team USA. This fight is last chance saloon for both these guys to get themselves into 1 more shot at a named opponent. Since this is a Puerto Rican flavoured card I'm gonna go with the big Puerto Rican to win a sloppy Heavyweight brawl!

Nova vs. Navarrete
Abraham Nova, TKO, R1
Nova is another exciting guy coming through. A lot of KO's. This is a lay up, I think Nova has just signed with Top Rank so this fight is to give him a nice highlight reel KO to introduce him to the ESPN viewers. Another guy to look out for

Anderson vs. Satterfield
Jared Anderson, TKO, R1
Anderson is 1 of the leading next generation of Heavyweight prospects. You have Dubois, Hrgovic, Ajagba leading the charge of guys coming up but behind them there's some even younger guys like Miello, Sonny Conto, Adeywole and this guy Anderson. A team USA top amatuer, he's actually been in camp with Tyson Fury as a sparring partner for the Wilder Fury fight, so he's bound to have benefited from that. This is another easy fight, don't expect it to go past a round or 2. Just keep an eye on this guy in the future

Tapology members can make predictions for upcoming MMA & Boxing fights. Alvarez vs. Seals is closed for new predictions. 78 total members made predictions on this event, breaking down as follows below.

Leaderboard of the best predictions by member: Alvarez vs. Seals Leaderboard