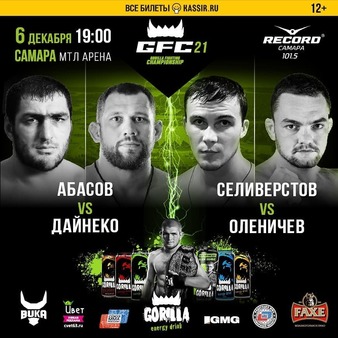 GFC 21
"The official Tapology discussion thread for the event!" (11 months)

Khisamutdinov vs. Volkov
Ruslan Khisamutdinov, DEC
My goodness. Now look at the face (grill, dome-piece, schnozz, schnoggin) that Mark Volkov possesses. That is a HIGHLY Punchable face. The ONLY one that comes close to having a face that's meant to have fists with evil intent to smash into said face, is either Tony Lopez or Bigfoot Silva. You could throw Crock Lesnar's big dumbass face in the mix as well.

Seliverstov vs. Olenichev
Oleg Olenichev, DEC
Olenichev is better than his 13-6 record suggests. He has fought a lot of the top Russians at 205 and 185. Seliverstov is the undefeated prospect but a lot of prospects take a loss at some point! Usually when they run into an experienced vet!

Abasov vs. Dayneko
Vladimir Dayneko, DEC
Abasov is another guy who ws really unimpressive last time out! He came into his fight with Kuniev as an unbeaten prospect with a lotta hype and he was smashed! Dominated from start to finish, had nothing on the ground and his striking looked subpar! I'm unsure if this was down to his lack of skills or just Kuniev being really good, Kuniev is pretty decent but a world beater he is not! Dayenko is around the same level as Kuniev, only losing to PFL finalist Isaev and Brazilian prospect Souza, who has smashed a few russians, so I'm gonna take Dayneko because Abasov looked so terrible when I watched him last!

Sangov vs. Kakhormanov
Abdusamad Sangov, TKO, R1
Sangov was so disappointing in his last fight, he has the look of a can crusher! I'm finding that there are quite a lot of these guys in Russia who have impressive looking records with lots of finishes and long win streaks only to find hen looking a little closer that most of the opponents have losing records! Still, after saying all that Sangov has been given anothjer can to crush it seems! I will not forget about him when he next fights any tougher opposition

Abasov vs. Dakaev
Mehdi Dakaev, DEC
I think Dakaev is the favourite? My memory of him is being dominated by Jaxck Grant in Cage Warriors. Abasov is a wily old Russian vet, I must say the profile picture does him no favours!! Was it taken on a Potatoe!?! I'll take the younger guy, but I'm not convinced!

Tapology members can make predictions for upcoming MMA & Boxing fights. GFC 21 is closed for new predictions. 74 total members made predictions on this event, breaking down as follows below.

Leaderboard of the best predictions by member: GFC 21 Leaderboard