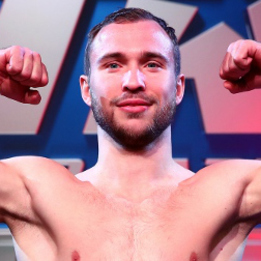 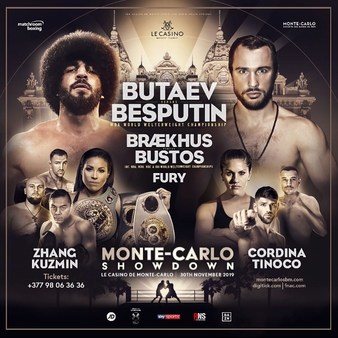 Besputin vs. Butaev
"The official Tapology discussion thread for the event!" (8 months, 4 weeks)

This Besputin fight is the best fight of this weekend. Winner probably faces Crawford next or Vergil Ortiz.

I would also second that @Shake

Besputin vs. Butaev
Alexander Besputin, DEC
TBH I don't know too much about either of these guys, I know more about Besputin. A super talented amatuer, over 300 wins! Plus he's 1 of these group of Russians/Ukrainians based in Oxnard, California, guys like Lomachenko, Gvodsyk, Baranchyk and Kavaliauskas. So hes got great training partners! That is for sure!!! Butaev I don't know too much, so for that reason I'll take Besputin. Plus he wears a funny hat!

Cordina vs. Tinoco
Joe Cordina, DEC
This could be an upset. Tinoco has already beaten a top UK prospect, he KO'd Jordan Gill in the UK a year ago! Cordina is a real slick boxer but he doesn't really like a messy fight which I think Tinoco will make it. Only thing is Tinoco will need another KO, after the Smith Ryder ******** decision it is becoming an open secret that to beat a Matchroom fighter you need to KO them to win on points!!! I really want to take Tinoco here but I'll go with the dodgy decision for Cordina

Braekhus vs. Bustos
Cecilia Braekhus, TKO, R5
Seems like Matchroom might be setting up a fight between Braekhus and my girl Katie Taylor, it's a rumour out there anyway. Though I think the size may be too much nows as good a time as any to fight, arguably the most successful female boxer all time! This is as much of a gimme fight as you can posibly get when fighting for all 5 World Titles!!! Only question is there a finish? Womens boxing, so probably not. I think the lack of finishes is largely down to the 2minute rounds. Why not 3??? I'll be an optimist and say there's a finish.

Fury vs. Sour
Hughie Fury, DEC
Hughie Fury gets a bit of undeserved stick I feel. I mean, he is a bit of a ****! And he doesn't have the undefeated record that is so cherished in boxing! But those losses are against Parker, Povetkin and Pulev, in Bulgaria!!! I mean, name another guy his age and experience with a record like that. This is the kinda fight he should be taking after the Povetkin loss, get a few wins and build up again to challenge for the British, European, Commonmwealth titles. Then see about World titles

Zhang vs. Rudenko
Zhilei Zhang, DEC
Not too sure about this Zhang guy? A huge Chinese Olympic heavyweight. Has the potential to be a huge star! I'm sure Hearn will manage him carefully towards a World title shot. But I'm not convinced, he has 20 wins over nobody! Even for Heavyweight boxing his record is padded! He has never been over 6 rounds, that was only 1x, majority of his fights are done in a round or 2. That looks great but you need to bank rounds against good guys. Rudenko isn't what I'd class as very good, I mean he lost to Lucas Browne!!! But he has never been finished and at least he's fought Povetkin, Hughie Fury and European champ Kabayel. I have a sneaky feeling this could be a disaster for Zhang if this gets past 6 rounds. I'm tempted to pick the upset but this is boxing and upsets rarely happen.